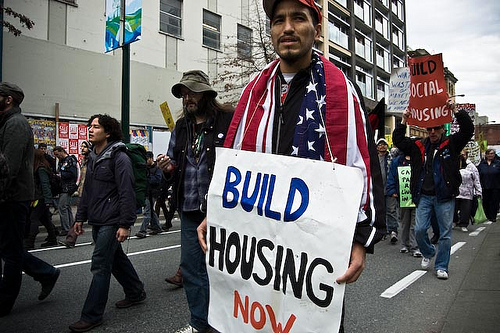 My brother Larry would have been 57 today.

In the winter of 2001 he died on the streets. He had spent most of his life on the road — picking fruit, working seasonally cutting Christmas trees, but mostly hitchhiking or riding the rails by clambering into open boxcars before the railway police could spot him. He once told me a harrowing story of scrambling up into the narrow opening between two freight cars and finding a rickety place to stand as the train whipped down the line. Not only was it difficult holding on, he had to avoid getting his leg caught in the steel coupling between the cars. Mostly he succeeded, and when he didn’t, he was lucky enough to extract his foot in time to come away with only some bruises and not something worse.

When Larry was thirteen he and a couple friends were arrested for stealing a six-pack of beer. His friends got off, but Larry was rocketed into the juvenile justice system. He spent six weeks in a facility thirty miles from home and was never quite the same afterward. He graduated from high school and feverishly held on to his dream of drumming in a band, but his restlessness and disaffection drove him from place to place, and often into the mean teeth of a society that has little use for poor and homeless people. As one of Kurt Vonnegut’s characters in Slaughterhouse-Five says, “It’s a crime to be poor in America.” This is a truth Larry experienced for decades.

He was jailed for vagrancy numerous times and was often physically assaulted. In the 1980s he called me from a mental institution and asked me to get him out — all the drugs they were feeding him, he said, were messing up his head. I talked with the people there, who eventually released him. He came and spent some time with me and we visited a nonprofit that found jobs for poor and low-income people. I was put off by the unexpectedly harsh tone of the staffer with whom we met. I suppose it was some variation on “tough love,” but it struck me as unnecessarily shrill and condemning of someone the person had just met. Larry took off the next day. I’m one of eight siblings, and each of us over the years offered help, but often Larry’s justifiable wariness of the kind of help he experienced at the hands of the system kept him in motion — and on to the next arrest or physical altercation.

For years I wondered why I got involved in political activism. Much of this had to do with the charged atmosphere I experienced in graduate school when a number of powerful social movements were gathering momentum in the 1980s, including those working for a nuclear free future or peace and justice in Central America. But slowly I began to realize that this path was rooted most deeply in a profound poignancy and indignation I felt at the way Larry was treated in this world at every turn: the trauma of systemic disregard, disrespect and active harassment.

Larry taught me that everyone matters, and it was this primal lesson that consciously and unconsciously fueled a longing within for a world whose policies, structures and conditions reflected this most basic fact.

In 1993, after a decade of activism focused on foreign policy, I worked for several years with Religious Witness with Homeless People (RWWHP). This San Francisco coalition of 45 churches, synagogues and mosques, under the leadership of Sr. Bernie Galvin, sought to dismantle the city’s Matrix Program. In a city that at the time had 16,000 homeless people and only 1,400 shelter beds, Matrix criminalized sleeping and eating in public. Under this policy, the city police made innumerable arrests and issued tens of thousands of tickets that went unpaid (most homeless people couldn’t afford the $78.00 fine) that increasingly risked being converted into jail time.

RWWHP mounted a nonviolent direct action campaign aimed at alerting, educating, winning, and mobilizing the populace and policy-makers for change through protests, fasts and lobbying. We organized a series of sleep-ins in the city’s parks, including Union Square (at the heart of the city’s fashionable downtown shopping district) and Golden Gate Park when, usually after the late local news signed off for the night, a phalanx of baton-wielding police officers would file in, roust us from our sleeping bags, and haul us off to jail.

We also challenged the ordinance that prohibited eating in public (members of “Food Not Bombs” and other groups had been arrested ladling out soup to hungry people on the street) by organizing a banquet for 800 homeless women and men in the space considered most off-limits by the powers that be: Civic Center Plaza in front of San Francisco’s ornate City Hall. A well-planned logistical operation delivered to the site dozens of tables, chairs, linen tablecloths, china, silverware, cut flowers, and many succulent dinner courses. Three choirs provided music. Both concrete and symbolic, this meal was a momentary tableau of the world we longed for: where everyone sits down together, eats together, relaxes together, enjoys one another’s company — while disregarding and undoing the regulations designed to separate and diminish.

Faced with the dilemma that this well-publicized feast posed, the police did not swoop down and arrest people from religious communities across the city. Front-page coverage of this event in the local press accelerated the campaign. Eventually RWWHP succeeded in ending the Matrix program, symbolized by the then-district attorney shredding thousands of tickets.

This victory did not mean the end of RWWHP’s work. Versions of Matrix have crept up over the past 15 years, and activists have had to mount the ramparts innumerable times in San Francisco and also across the country. This vital tradition of struggling to end the ongoing attack on homeless human beings is one of the many important tributaries flowing into the river that is the Occupy movement as it readies to renew its work for economic equality.

After Larry died, there was a procession for him organized by the local Catholic Worker and homeless activists. The police tried to prevent us from going into the street, but there was something both gentle and firm in the crowd that changed the atmosphere, a sense of reverence for everyone everywhere as we washed into the streets that Larry loved, even though this was one of the places where he was badgered and arrested and sometimes prevented from occupying. As we moved in a determined silence, the stance of the police shifted. They began to stop traffic so we could move unimpeded through the intersections and on through the downtown area, arriving finally at City Hall, where a few people spoke, imploring the city to do more for those without homes.

Today, I mark Larry’s birthday by remembering his life and death and spirit. His ongoing presence stirs a longing for a time and place where the infinite worth of each one of us is taken for granted — and stokes a willingness to take action to help bring all of us a bit closer to that unending banquet.

How LGBTQ people are resisting Bolsonaro’s Brazil through art