Changing the world for good doesn’t depend on money, status, or political power. It hinges, instead, on ordinary people unleashing their creativity and gumption.

This is not an airy theory for Jack Healey. It’s something he has experienced throughout his life. The former executive director of Amnesty International USA took another opportunity to spread this news this past Monday night when he spoke to a group of students at DePaul University in Chicago.

His message to them: Shake off any powerlessness that might be holding you back from making a difference. At a time when the concern for human rights has been largely sidelined in the national conversation, tap your power to work for those rights in their most comprehensive sense: from jobs to justice. In short, take action for a world where everyone matters.

Healey’s presentation was, though, more than pithy marching orders. It was a stream of stories—weighty, startling, profound, and occasionally humorous—which, drawn from his fifty years as an agent for change, made the point repeatedly that people power works.

Healey is most famous for pioneering rock activism. When he came to Amnesty in 1981, he envisioned increasing the organization’s membership; building its capacity to respond to human rights violations worldwide; and contributing to mainstreaming the notion of human rights. He decided to do this through music.

In the 1980s and 1990s Healey brought some of the world’s biggest rock stars together to tour for human rights, including Sting, U2, Bruce Springsteen, Youssou N’dour, Tracy Chapman, and Peter Gabriel. On the 40th anniversary of the Universal Declaration of Human Rights, for example, he organized “Human Rights Now,” a tour featuring concerts in 20 cities across the planet, including New Delhi, Harare, Abidjan, São Paulo, Buenos Aires, Budapest, Montreal, Barcelona, and Tokyo. This initiative highlighted massive human rights violations and brought a message of hope and empowerment. It was an historic outpouring of music for social change experienced by a million people on nearly every continent.

Born in 1938 in Pittsburgh into a large Irish family of coal miners and steel mill workers, Healey became involved in the Civil Rights Movement during the 1960s as a theology student in Washington, D.C. During that period he attended a talk by Dorothy Day, co-founder of the Catholic Worker movement who, he now says, had a pivotal impact on him. So did a comment by theologian Rabbi Abraham Heschel, who said that the key to wisdom was curiosity. Healey remembers saying to himself at the time, “I’m going to be curious, because I want to get some of that wisdom!”

Jack’s curiosity led him all over the world. Ordained a Catholic priest in 1966, Healey directed a campus ministry center in Maryland. After leaving the priesthood in 1968, he organized walk-a-thons throughout the U.S. in which hundreds of thousands of young people raised millions of dollars for the fight against world hunger; worked with comedian and activist Dick Gregory; and served as director of the Peace Corps in southern Africa for five years. These experiences prepared him for his twelve-year tenure at Amnesty, where he led the organization into an era of unprecedented growth and effectiveness. Under his leadership, Amnesty strengthened its ability to address torture, the death penalty, political imprisonment, and other human rights abuses.

Healey left Amnesty in 1993. He now directs the Human Rights Action Center in Washington, D.C., where he continues to campaign for justice and human dignity. 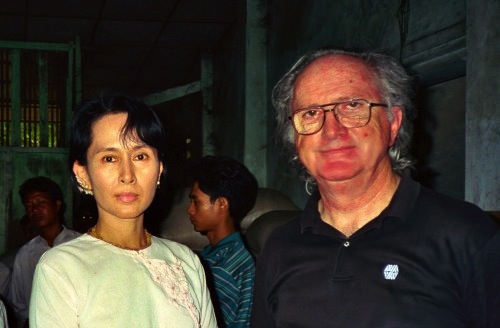 In 1999 Healey traveled to Rangoon to meet with Aung San Suu Kyi, the Nobel Peace Prize winner whose party, the National League for Democracy, had decisively won the 1990 national election in Burma. In response, she was placed under house arrest by the military, where she remained for 15 out of the next 21 years, until her most recent release in November 2010. After their 1999 meeting, he returned to the U.S. committed to help free her and to support the pro-democracy movement in Burma. He organized a variety of projects, including concerts, a compact disk, and thirty online videos to help raise the visibility of her case and the struggle in Burma. He also played a key role in the U.S. Campaign for Burma.

These days he continues to work on a long-term project to raise the visibility of the Universal Declaration of Human Rights, including a campaign to have it printed in every passport. He helped produce a little animated video (above) to get his point across. Having these rights written down and widely recognized, he stresses, can be the basis of innumerable movements for change.

For as long as I’ve known Jack Healey, I’ve seen that this is how his mind works. He possesses a comprehensive vision of a more just and nonviolent world, but he doesn’t tarry much with the abstract ideal. (As he said the other night, “We know injustice when we see it. Justice is another matter.”) Instead, he is endlessly devising creative maneuvers designed to mess with the current cultural arrangements and to prod us to think concretely about fixing what’s broken—and then getting to it.