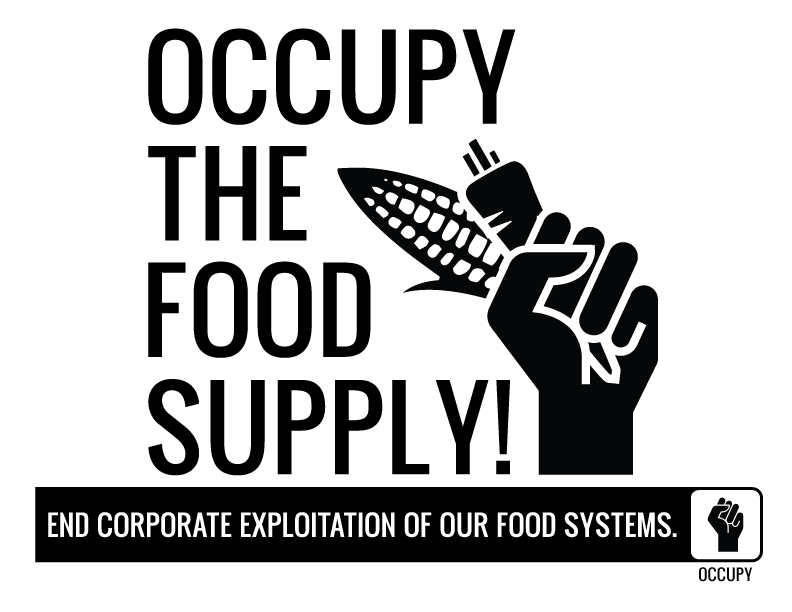 Occupy the Food System—the day of action for food justice on February 27—could be the beginning of a broad-based food justice movement that is global in scope but local in action. A unique coalition of food justice workers, consumers, farmers and activists, organized by Rainforest Action Network, momentarily converged under the banner of ending the corporate exploitation of our food system for a day of protest and consciousness-raising.

Noticeably lacking, however, were the rural farmers. To be sure, a number of farmer-backed groups, like Family Farm Defenders and the National Family Farm Coalition endorsed the action, but endorsing is a far cry from nitty-gritty organizing that turns people out.

At last weekend’s MOSES conference, which is the largest organic farming conference in the nation, and two days before #F27, issues of food justice were buzzing. The conference is an interesting blend of technical information, policy analysis, community organizing, trade show, social networking and cultural celebration. Needless to say, I think someone from Occupy the Food System (OtFS) would have received a warm welcome alongside the other keynote presenters who spoke directly about food injustice and the need to democratize the food supply. But aside from a few handbills I stumbled upon at an unstaffed table, OtFS was not even a blip on the radar. A missed opportunity, I thought, for Occupy to connect with concerned and engaged farmers who know a thing or two about the food system.

Also on February 27, New York Federal Judge Naomi Buchwald delivered a blow to the Organic Seed Growers and Trade Association (OSGTA) when she dismissed their suit filed against Monsanto that alleged that genetically-modified seed threatens organic agriculture. Organic producers, in the words of OSGTA President Jim Gerttison, “are under threat.”

The New York ruling reveals just how influential corporate interests are in deciding the future of food. Monsanto owns the genetic traits of 95 percent of soybeans and 80 percent of corn planted in the U.S. and has control of one-fifth of the global seed market (nearly all of which is genetically modified). Archer Daniel Midland (ADM), Cargill and Bunge control 80 percent of the world’s grain. James Bovard, of the Cato Institute, reports that

The small acts of resistance that made up OtFS—seed exchanges, coop gatherings, film screenings, guerrilla gardening and seed bombing—are great ways to build community, spread awareness and reduce an individual’s reliance on corporations. But is that the kind of activism capable of confronting the global hegemony of corporate food or addressing the consequences of poverty and hunger?

Food First, an endorser of OtFS, is in the business of connecting movements. As a think tank that believes people go hungry because of injustice, Food First “analyzes the root causes of global hunger, poverty, and ecological degradation and develops solutions in partnership with movements working for social change.”

I spoke with Eric Holt-Giménez, Food First’s executive director, about an op-ed he penned, “Occupy the Food System: Construction or Protest” and the need for food movements to converge at the individual, institutional, and structural level to end the corporate control of our food system. “We need social movements,” Holt-Giménez said. “It is important to find avenues of convergence and [Occupy the Food System] is a good example of that.” His perspective is that if the food justice organizations at the individual and institutional level—organizations like your neighborhood coop, Food Corps and other local alternatives—synthesize with the Occupy movement’s structural analysis of the corporate control of democracy, then something big will happen:

People are trying to construct alternatives that help us weather the ravages of the market, without changing the rules affecting the market. These rules are made for big corporations, not for us. And the Occupy movement is saying that to change rules, you have to change the system.… The future of Occupy will depend on whether or not it can actually establish relationships with other movements. And then Occupy becomes a tactic for those movements, bringing increased and broader support from other people.

One organization, Land Stewardship Project—not officially an endorser of OtFS—reflects that kind of transitional movement between food-focused, locally-based alternatives and politically-engaged struggle for structural change. In a phone interview, Anna Cioffi told me that LSP

farmers are engaged in food justice in direct ways: food shelves, alternative practices, etc. Also, as a food democracy organization, LSP does a lot of work against corporations that are trying to control the food market, that are harming farms, small family farms. We are against the centralization of the food system and trying to get [LSP farmers] a greater advantage in the market.

It is a little more difficult for farmers to be actively involved in the Occupy movement, especially if they are far from city centers. Cioffi added that farming can often be lonely, isolating work and that “being connected to organizations, other farm networks with like-minded folks” can be a way to “stay involved in the movement.” Many Occupies have already begun the delicate work of partnering with other organizations, particularly those at the local level. In terms of food justice, it is mutually beneficial for the Occupy movement, with its militant activism and savvy use of social media, to be connected with the stable, grassroots organizations, like LSP and Food First, that have proven to be effective and long-lasting in terms of connecting people to social change. If marginalized people—including farmers—feel like Occupy is looking out for them and willing to fight for their interests, Occupy the Food System will gain traction, focus on structural problems, and, ultimately, chip away at the corporate control of food—all the while enjoying a cup of fair trade coffee at a community screening of King Corn at the coop.

Championing food sovereignty and fair prices for farmers (i.e. re-working commodity subsidies and enforcing anti-trust laws) might be a way for the Occupy movement to continue developing local support, particularly in the Midwest, and address the real needs communities are facing, suggests Holt-Giménez. “The bane of populism is that it does not have a political north. It will take political will on the part of Occupy to solve the very real, immediate issues that communities are facing, such as food, shelter and violence.” he said. “This has happened in other parts of the world and it can happen here. If local people jump on Occupy, then it’s unstoppable.”