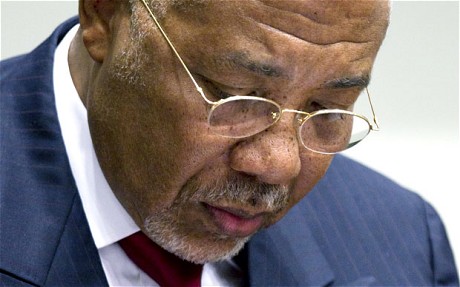 The celebrations of Sierra Leone’s 51 years of independence from British rule yesterday were marked with a special flair: Liberia’s President Charles Taylor, the man widely acknowledged as responsible for the country’s vicious ten-year civil war, has become the first former head of state to be convicted by an international court since the Nuremberg tribunals of Nazi war crimes. Taylor’s conviction, handed down by the controversial International Criminal Court (ICC) at The Hague, lays responsibility on Taylor for aiding and abetting acts of terrorism, enslavement, murder, rape, conscripting child soldiers and “other inhumane acts,” including the planning and commissioning of various criminal activities surrounding the 1999 invasion of the Sierra Leone capital of Freetown. Echoing the feelings of many survivors, Leonean nonviolent activist Mohamed Fofanah of the Lam-Tech Foundation and the Messeh Partnership for Youth Development told Waging Nonviolence, “Many people think that the Special Court is a witch hunt, but for me it is not … Charles Taylor stole my childhood.”

Writing for Pambazuka News and reporting directly from the trial, Liberian scholar Robtel Neajai Pailey recounted the nine-year process of bringing the man portrayed as the most notorious African warlord to justice. Though the decision was announced as unanimous, Alternate Judge El Hadji Malick-Sow read out a dissenting opinion, arguing that Taylor was far from the center of those responsible for Sierra Leone’s troubles. With “one man, two wars, and one guilty verdict,” however, it seems clear that an imperfect, selective international process has at least held accountable a leader who clearly profited greatly off of the misery of the people of West Africa.

Taylor’s defense attorney Courtenay Griffiths may have correctly asserted the beliefs of many when he stated that a fair and impartial international court would insure proceedings against all those responsible for wartime atrocities, including former U.K. Prime Minister Tony Blair and U.S. President George Bush. In addition, as Pailey noted, “durable peace in post-conflict countries like Sierra Leone and Liberia require domestic institution building of justice systems, not an expensive, internationally funded legal apparatus.” The fact that the ICC and similar bodies are fraught with problems, however, does not discount the importance of the verdict against Taylor. Pambazuka’s Horace Campbell put it best:

Pan Africanists must oppose crimes against humanity; depoliticize the ICC at present, and work for the unity of Africa. … Africans must strengthen social justice movements in their societies so that it becomes a moot question as to where to put on trial those who orchestrate the deaths of thousands.

Indeed, over 50,000 were killed in the war in Sierra Leone, and over 150,000 were killed in neighboring Liberia during roughly the same period. Diamonds mined in southeastern Sierra Leone and smuggled through Liberia fueled the purchase of arms, and abducted children mostly under the age of 15 were widely used as combatants. Approximately 10,000 people had their hands, legs or other extremities forcibly amputated by rebel groups. Nevertheless, substantial peaceful initiatives — including music and art therapy, rehabilitation services, and non-governmental educational and support organizations — have become a staple of Leonean life in the decade since the end of the war. Much more may be needed, including an end to the use of child soldiers by the 25 countries which still allow them, but the high-profile guilty verdict and the sentencing which will be handed down in late May still provide concrete emotional relief.

When this writer co-led a health and education delegation to Sierra Leone and Liberia some years ago, the enormity of inter-connected hardships still facing the region was the most striking feature of our time with African counterparts. Psychological stability, perhaps passé from a Western perspective, and symbolic court decisions (especially ones which the U.S. State Department can too-easily cheer at), may rankle the strident desires of leftists from the Global North. Nevertheless, in a country with a still-devastated infrastructure and a total of one active psychiatrist (where the population itself serves well as “therapeutic aids” to one another), the significance of the ICC decision must not be misunderstood by progressives who should be willing to suspend their rhetoric and ideological purity for a deeper analysis of the complexity of on-the-ground conditions.

The ICC is surely a biased body with an agenda too focused on African collaborators and not their Western patrons; traditional, African-based initiatives of restorative justice and grassroots decision-making are absolutely more powerful than a single act of the Special Court. But the Taylor decision is still one positive step — only one amongst many others which have and need to take place — which emboldens the work of civilian resisters who are beginning to build visionary alternatives to the dead-end choices of gangster nationalism or globalized corporate looting.

“There is no doubt that today’s verdict sends an important message to high-ranking state officials,” stated Amnesty International Sierra Leone director Brima Abdulai Sheriff. “No matter who you are or what position you hold, you will be brought to justice for crimes.” Despite the peace agreements which ended the war and the recommendations of a Truth and Reconciliation commission which presided over hearings about the war, no redress has been awarded to those who suffered the most. “Reparations are integral to achieving justice for the victims,” added Sheriff, “and assisting them to rebuild their lives.”

For some peace workers, however, it will take more than money to right the wrongs of the past. “I lost both my parents when they recruited me into the armed conflict at age 13,” reflected Fofanah, who has dedicated himself to youth empowerment work since 2002. Fofanah agreed that much “silent suffering” continues amongst those most affected by the atrocities, but seeing Charles Taylor forced to pay for his deeds is a step in the right direction of saying “no to weapons and yes to democracy.”

Judgment and justice in Sierra Leone

As we approach the 20th anniversary of 9/11, U.S. citizens must insist on paying reparations and choose to lay aside the cruel futility of our forever wars.

What a truly humanitarian response in Afghanistan would look like

Ten years later, the legacy of Occupy Wall Street has never been clearer

How students pressured Harvard to divest from fossil fuels – and won

Afghan women are at the forefront of protests against the Taliban

As war keeps poisoning humanity, organizing continues to be the antidote