When contemplating “The Marriage of Gandhi and Che,” the subtitle of my contribution to the new book Beautiful Trouble: A Toolbox for Revolution, I was originally thinking of something frilly with lace — perhaps an off-white gown of appropriate drama. Confronting this challenge of representation, Agit-Pop co-founder Andy Meconi came up with a more iconic image expropriation: the smiling old soul superimposed onto the dashing beret. Two great faces that face great together.

This week’s formal release of the OR Books publication put together under the auspices of Agit-Pop and the Yes Labs (“assembled” rather than edited by Andrew Boyd with Dave Mitchell) is indeed a cause for celebration. Bringing together more than seventy authors in a collection of two-page mini essays, Beautiful Trouble looks at interdependent theories, principles, tactics and case studies. Though largely written by a younger generation of agitators, including Waging Nonviolence’s own Bryan Farrell, Nathan Schneider and Eric Stoner, the book includes pieces by Starhawk, Lisa Fithian, Arun Gupta, Nadine Bloch, the Coalition of Immokalee Workers and many others. Accompanied by a growing website of supplemental materials, the toolbox package seeks to put the accumulated wisdom of decades of creative protest into the hands of the next generation of change makers. Written in an engaging style and format and chock-full of photos, cartoons and visuals to incite and inspire, the book is sophisticated enough for antiwar and human rights veterans, while being easily accessible for newcomers.

The special timing of this effort has not been missed by any of the media-conscious movement-builders involved. With the birth of a new global people’s movement firmly in mind, the wranglers responsible for Beautiful Trouble understand that “the impossible suddenly seems possible, and all around the world ordinary people are trying out new tools and tactics to win victories where they live.” The urgency of this political moment, in the words of Andrew Boyd, “demands resources that will transform outrage into effective action” — action for building the next revolution. 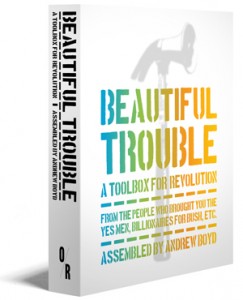 For many of us, the revolution we seek must understand the connections between means and ends, as well as include the mass-based people power central to effective unarmed civilian resistance. Though the term “nonviolence” has long seemed negative to many, rehabilitating the phrase by reviving the more militant concept of “revolutionary nonviolence” is also a process whose time has come. Mainstream politicians and misguided textbooks have tried to convince us that Martin Luther King and Malcolm X were extreme opposites whose visions and practices had nothing to do with one another, but the truth has always been more nuanced, dialectic and complicated than that.

It is not that Che Gandhi seeks to become the new “brand” (Che McGandhi, if you will) by accepting everything those two forefathers believed. This author, for one, does not think that Che’s idea of foco guerrilla warfare has much to offer modern-day radicals; nor do I accept Gandhi’s notions on abstinence and sexuality. The hero-worshiping of both of these figures has done much damage to their most significant joint legacy — that one must give one’s all to a total revolution which is based on love of the people. Che McGandhi’s mass appeal might not yet match the Mc-numbers we’d like — only 300 billion served? How about getting the other six and a half billion their social change with equal portions peace and justice, please? Perhaps we need to invent another prophetic hybrid, this time a West African woman — in tribute to all the women of the Global South who are leading nonviolent revolutions today. Let’s call her Cheluchi NGandhi (points for anyone who can parse the multiple hidden meanings).

What we surely and certainly need, in the U.S. and across the planet, is a new approach toward organizing that includes a sense of humor, breathtaking creativity and a focus on appealing to greater numbers of people without losing sight of how issues and struggles are connected. As we join together for that upcoming uprising, won’t we be causing some beautiful trouble then?

In the West Bank, map-making is a form of struggle

The ‘Beautiful Trouble’ of nonviolent revolution