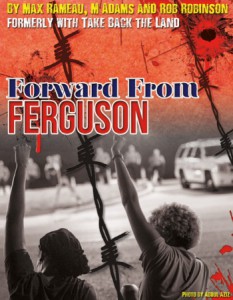 A rebellion can’t last forever. But in the weeks since the killing of Michael Brown, the people of Ferguson, Mo., have been keeping it up for the rest of us. They’ve dragged this country into a long overdue national discussion around race, police and militarized policing. They’ve called for a national “weekend of resistance” in Ferguson on October 10-13 to help keep the movement moving. But the Ferguson moment is also in danger of ending, of becoming just another on a long list of dreams deferred, and exploded, and left to burn out and rot.

Now is when vision matters most — a vision or visions that can carry people from the moment to momentum, within which a movement can mature and grow and win. That’s why we should be discussing proposals like Forward from Ferguson, a new report by Max Rameau, M Adams and Rob Robinson — all veterans of the influential housing-justice group Take Back the Land, now working as the Center for Pan-African Development. The document, drawing on utterances of Malcolm X, calls for the U.S. racial justice movement to turn from the framework of civil rights to human rights. This is Malcolm speaking:

In addition to a different rhetoric, seeing the problems of racist policing and mass incarceration in light of human rights means new strategies. For one thing, it means more opportunities for solidarity with communities facing violations of other human rights all over the world. It also means not treating the U.S. government as the ultimate arbiter, but also bringing rights violations before international organizations like the United Nations. The authors suggest a variety of local, national and movement-centered demands for the movement growing out of Ferguson.

Read it, debate it, build on it.

Bitcoin for activists — what you need to know

When the next crisis comes, which movements will seize the opportunity?