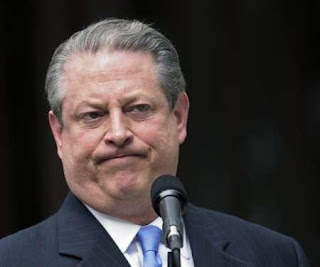 The New York Times ran a piece last Friday on Al Gore with the following lead: “Former Vice President Al Gore has ‘not ruled out’ engaging in civil disobedience against new coal plants.”

That got me briefly excited, as I’ve long been annoyed by Gore’s failure to act in solidarity with the many people across the country and around the world who have been arrested attempting to shut down coal plants, many of whom were likely inspired by his words.

In 2007 Gore told the Times‘ Nicholas Kristoff that he couldn’t understand why there haven’t been “rings of young people blocking bulldozers, preventing them from constructing coal-fired power plants.” Then, in September of last year, he made headlines for saying, “If you’re a young person looking at the future of this planet and looking at what is being done right now, and not done, I believe we have reached the stage where it is time for civil disobedience…”

While I applaud his sentiment and am impressed that someone of his political stature recognizes the power of people working together nonviolently for change, it’s hard to figure why he places the impetus on young people. Those who have taken part in coal-plant protests, including NASA scientist James Hansen (age 65) and writer/farmer Wendell Berry (age 74), seem to realize that the impetus is on everyone who understands the danger of burning more fossil fuels, not just those who may live long enough to become climate refugees.

The Christian Science Monitor ran a piece last year that asked the question, “Does Al Gore think he’s too old for civil disobedience?” The writer went on to make a very keen observation:

At age 71, Ghandi was arrested and served two years in prison. The US labor organizer Mother Jones was still facing charges of sedition in her 80s. Even TV president Martin Sheen, who is eight years older than Gore, managed to get himself arrested at an antinuclear action in Nevada last year, for what he says is the 65th time. Civil disobedience has never been the exclusive province of the young. And, anyway, as these and many other nonviolent resisters have demonstrated, you’re only as old as you feel.

Unfortunately, and back to why the Times piece only got me briefly excited, Gore went on to say last week that he didn’t think civil disobedience would be the best use of his time. I doubt he meant it as a slap in the face to all those who have been moved enough by the evidence highlighted in his film to take a risk for what’s right, but it’s hard to see it any other way.