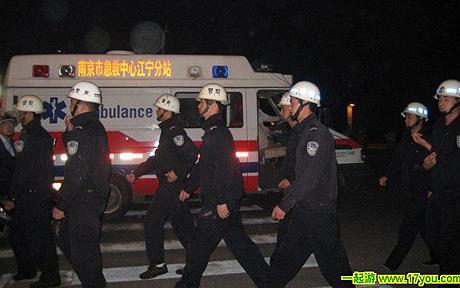 Thousands of students from the Nanjing University of Aeronautics and Astronautics in eastern China took to the streets Monday evening to protest the enforcement by police of restrictions on street vendors. While the national media predictably ignored the story, according to the Associated Press, it was well documented on numerous websites and blogs:

As the demonstration carried on into the morning, however, violence apparently erupted. Eyewitnesses said that at least 30 protesters were injured and one police car was smashed.

There have been numerous student-led protests in China due to poor living conditions, increasing fees and high unemployment rates for new graduates. It’s estimated that half of China’s six million graduates from last year are still looking for work, a situation which is not likely to improve this year due to the economic crisis.

Despite the fear that was instilled in the population by the brutal crackdown in Tiananmen Square twenty years ago, protests in China have been widespread and at times successful in recent years. In her phenomenal book, The Shock Doctrine, Naomi Klein writes that:

According to official government sources, in 2005 there was a staggering eighty-seven thousand large protests in China, involving more than 4 million workers and peseants. China’s activist wave has been met with the most extreme state repression since 1989, but it has also resulted in several concrete victories: major new spending in rural areas, better health care, [and] pledges to eliminate education fees.