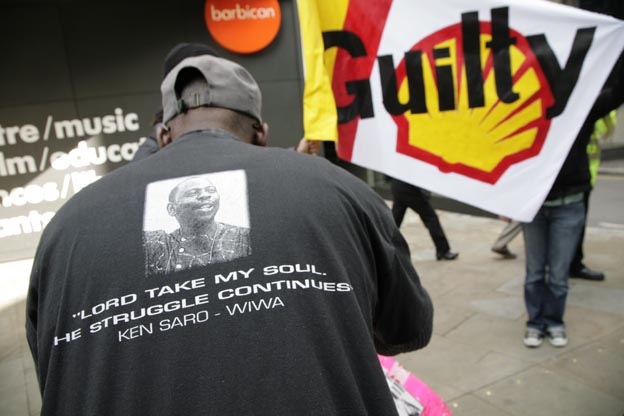 Royal Dutch Shell will stand trial in New York next week for its complicity in the 1995 torture and execution of Nigerian environmental activist Ken Saro-Wiwa and eight other members of his ethnic Ogoni group for what has been proven to be trumped up charges. Saro-Wiwa’s son, Ken Wiwa Jr., explained the scenario that led to his father’s murder in The Guardian this past Sunday.

Ken Saro-Wiwa’s real “crime” was his audacity to sensitise local and global public opinion to the ecological and human rights abuses perpetrated by Shell and a ruthless military dictatorship against the Ogoni people. The success of his campaign had mobilised our community to say “No to Shell” and to demand compensation for years of oil spills that had polluted our farms, streams and water sources. My father called the world’s attention to the gas flares that had been pumping toxic fumes into the Earth’s atmosphere for up to 24 hours a day since oil was discovered on our lands in 1958. He accused Shell of double standards, of racism and asked why a company that was rightly proud of its efforts to preserve the environment in the west would deny the Ogoni the same.

In response to his campaign, Shell armed, financed and otherwise colluded with the Nigerian military regime to repress the non-violent movement, leading to the torture and shootings of Ogoni people as well as massive raids and the destruction of Ogoni villages.

Shell is also standing trial for conspiring with the military dictatorship to violently shut down the peaceful protests of the Ogoni people, thousands of whom were inspired by Saro-Wiwa. In a powerful segment about the trial on Democracy Now! yesterday, Saro-Wiwa was shown giving the following speech to his followers:

The indigenous people have been cheated through laws such as are operated in Nigeria today. Through political marginalization, they have driven certain people to death. In recovering the money that has been stolen from us, I do not want any blood spilled, not of an Ogoni man, not of any strangers amongst us. We are going to demand our rights peacefully, nonviolently, and we shall win.

Many are expecting this to become a landmark case if Shell is found guilty, as it would pave the way for other transnational companies owned or operated in the US to be held responsible for human rights abuses commited abroad. Although it would be a long-time coming, such an outcome would be precisely what Saro-Wiwa predicted before his execution. Although he was ultimately prevented from speaking it, this is what, according to his son, Saro-Wiwa had prepared:

“I repeat,” he wrote in what would have been his final statement to the military tribunal that was to order his execution, “that I and my colleagues are not the only ones on trial. Shell is here on trial… the company has, indeed, ducked this particular trial, but its day will surely come … there is no doubt in my mind that the ecological war that the company has waged in the delta will be called to question sooner than later and the crimes of that war be duly punished. The crime of the company’s dirty wars against the Ogoni people will also be punished.”

For more on the trial, Saro-Wiwa and Shell’s abuses visit The Case Against Shell and the Shell Guilty Campaign.

Shell to stand trial over murder of environmental activist