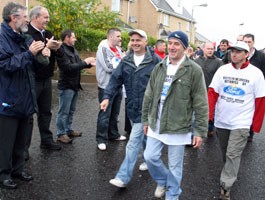 Visteon auto parts workers in Belfast who were fired with only a few minutes notice at the end of March ended their seven week-long sit-in last Monday after winning a severance package that was 10 times larger than the company’s original offer.

“We believe we have achieved more than we or anyone else could have ever dreamed of,” said Gerry Campbell, the spokesperson for the workers. “After bringing Ford and Visteon back to the negotiating table through a moral and dignified protest we have achieved all that we can through this action.”

In these tough economic times, there was a great show of solidarity with the workers’ struggle. According to the Irish weekly An Phoblacht:

Throughout the sit-in, the workers received enormous support from the people of west Belfast and beyond. Local Sinn Féin representatives, trade unionists and the broader community supported the sacked workers by bringing food, supplies and donations.

Hundreds of people joined a family fun day in solidarity with the men and women on 5 April. Hundreds more joined a march through west Belfast to the factory site on 8 April. On 17 April, up to 1,000 workers brought Belfast city centre to a standstill in an ICTU-organised lunchtime rally and march in solidarity with the thousands affected by mass redundancies, with a special emphasis on justice for the Ford-Visteon workers.

Workers from Waterford Crystal, who began a seven-week occupation of their factory to save jobs in January, donated €5,000 to the west Belfast workers.

The worker’s victory was only partial, however, because they were not able to save their jobs, and Visteon still refuses to pay for its pension obligations. Therefore, despite ending the occupation of their factory, the workers do not see their struggle as over.

“The fight for the pensions will continue in earnest,” said Campbell.