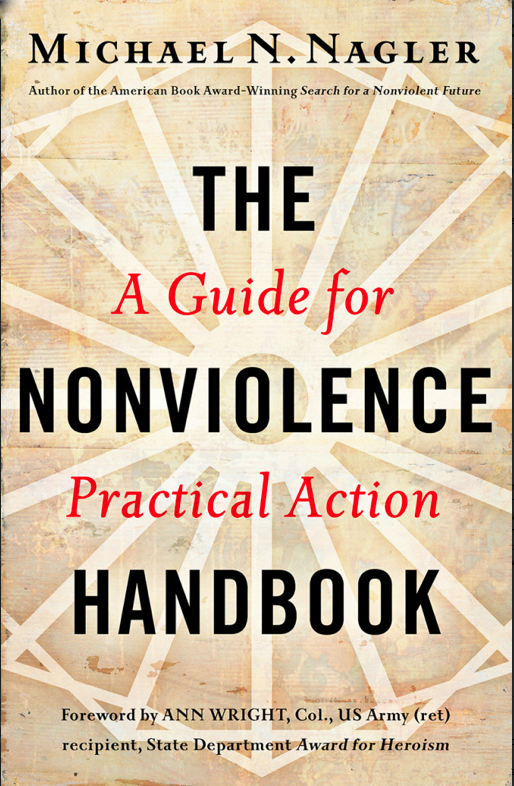 The Nonviolence Handbook: A Guide for Practical Action — a new volume by long-time peace and nonviolence scholar Michael Nagler published this month by Berrett-Koehler — offers the reader a crisp articulation of the dynamics, principles and contemporary application of Gandhian nonviolence that is both brief and clear. A scant 84 pages, including footnotes and an index, this publication really is a handbook in the classic sense: a short compendium of concise information about a particular subject, a type of reference work, a collection of instructions, and something “small enough to be held in the hand.” Nagler’s new book is, in this sense, a handy summary of the workings of nonviolent change and how it can transform our lives and our world.

In the interest of full disclosure, let me say from the outset that I was Nagler’s teaching assistant years ago and he, in turn, served on my degree committee in graduate school. I have always found his work a powerful contribution to nonviolent studies. I have used his publications in my teaching, including The Search for a Nonviolent Future, which I consider to be one of the best books ever written on the power of nonviolence. Even before meeting Nagler, though, his work influenced me strongly. As a neophyte activist in the 1980s I happened upon his America Without Violence, which opened up for a social change newbie a vision of nonviolence grounded in humanity’s potential. It helped strengthen my hope that enduring nonviolent transformation was possible.

The current book reinforces my regard for Nagler’s work and, though I see some places where this slim volume could be strengthened, it nonetheless is a major contribution to the growing movement for nonviolent change, precisely because it is so succinct. Nagler’s recent exertions have tended to move in the opposite direction — for example he teamed up with Marc Pilisuk a couple of years ago to produce a sprawling, 1,100 page three-volume set on peace movements — and he is currently at work on Roadmap, a far-reaching, long-term initiative of the Metta Center for Nonviolence Education to nurture a culture of nonviolence.

In contrast to these immense efforts, The Nonviolence Handbook places before us a short, carefully constructed presentation that conveys the essentials. Drawing on his longer works — and a series of shorter booklets that Nagler has produced over the years — this handbook has succeeded in clarifying the power and potential of nonviolence in simple and direct terms. I came away from reading it with the sense that every word was considered, weighed and deliberately chosen — and that this elemental precision was the result, not simply of scrupulous editing, but of a lifetime of reflection and experimentation.

In the short space of this book, Nagler lifts up many dimensions of the nonviolent life. Here are only a few of them.

Nonviolent change is possible because it is the human default, not the exception. Nagler holds with Gandhi that “nonviolence is the law of our species,” which means that, even deeper than our tendencies toward violence and the scripts that reinforce it, we have a profound unity from which flows our capacity for cooperation, collaboration, and well-being for all. But it also means that we have constructed cultures and societies that upend this potential — privilege and reinforced violence, separation and domination. The fact that “human beings have the potential to be nonviolent — and to respond to nonviolence when it’s offered — implies a much higher image of the human being than we are presented with in the mass media and throughout our present culture,” Nagler writes, “but because of that very culture, we can’t expect our nonviolent potential to manifest by itself.”

To tap our nonviolent power means challenging a system of domination by neither flight nor fight — to identify a third way of proceeding, or what civil rights movement activist Andrew Young called “a way out of no way.” For Nagler, this involves unleashing what Kenneth Boulding calls our integrative power and what Gandhi dubbed satyagraha (“clinging to truth,” “soul-force” and “active nonviolent resistance”). In exegeting these increasingly familiar notions, Nagler stresses a number of key points.

First, though it is natural, nonviolence does not come easily. It often involves struggle. Though this is not a new idea (it is a common enough experience for those who try to live the nonviolent life or make social change) his explanation is illuminating: This very struggle is the source of nonviolent power. To confront injustice — everything that is not nonviolent — often unleashes anger and fear. Nonviolent struggle does not suppress our anger or fear but transmutes them into what Gandhi called “a power that can move the world.” Or, as Nagler puts is, “Nonviolence is the power released by the conversion of a negative drive.”

Second, the person is not the problem. Nagler puts this Gandhian and Kingian point forward very clearly: “It is not me against you but you and me against the problem; there is a way both of us can benefit and even grow,” he writes. “This ability to turn an argument into a problem-solving session, a dispute into a learning experience, and eventually a feeling of alienation into an awareness of unity benefits all parties and creates a strong attractor toward creative resolution for all.” Here, too, is a potential source of power: “The more you respect the humanity of your opponent, the more effectively you can oppose his or her injustice.”

Third, “the sooner we can respond to a conflict actively and nonviolently, the less we will have to suffer to resolve it.” Here Nagler presents a graph he developed years ago entitled “The Three Stages of Conflict Escalation” — namely, conflict resolution, satyagraha, and sacrifice. We are called to transform conflict before it becomes intractable — and to be equipped to take action, including risky action, when it does.

There are many more themes in this book, as well as suggested practices and directions for going forward. Most of all, Nagler provides a coherent framework for understanding the dynamics and possibilities of nonviolent power.

There is an advantage to having such a short volume in one’s back pocket, ready for the next conflicts along the way. Nagler highlights this accessibility by adding a list of key ideas and principles we can review on the run.

But something this short also has its drawbacks, including a dearth of deeply analyzed stories or examples that are the foundation for such ideas and principles. I am reminded of something I heard from a long-time activist in a workshop where we were studying Martin Luther King’s six principles of nonviolent resistance. He said we really can’t understand these guidelines without also reading “The Letter from a Birmingham Jail,” which provides both the context and keys to them. Similarly, while Nagler does make reference to numerous cases of nonviolent action, we don’t engage strenuously with the deep, and deeply troubling, realities embedded in the challenges and breakthroughs of lived experience that more detailed story-telling would offer.

This, of course, is not Nagler’s purpose here. It is up to us to engage with these stories on our own, which Nagler encourages by providing a select bibliography and a list of websites — including this one.

Nagler’s volume refers extensively to social movements and campaigns, but most of the breakthrough dynamics of nonviolence are largely couched in terms of impacts on individuals involved in that process (policy-makers, police officers, troops) and less on the role of nonviolence in moving an entire society or mobilizing broad people power for change. A more explicit focus on the role of nonviolence in educating, winning and mobilizing the populace — as the late Bill Moyer framed it in his book Doing Democracy — would strengthen this volume.

The closest we get to this here is in the marvelous foreword by Ann Wright, a retired Army colonel who resigned from her posting at the U.S. State Department on the eve of the U.S. invasion of Iraq in 2003 and has been crisscrossing the country and the world ever since then working for peace and putting these principles into practice. She is working relentlessly to build the people power that we so sorely need to make the fundamental changes the world requires to survive and thrive. Toward this goal, the insights of Nagler’s handbook are critical. As she puts it: “Courage, complemented by the knowledge of skillful nonviolence, as provided in this handbook, is a recipe for a world of peace and justice.”

I agree with Ann Wright. We need both our fearlessness and the dynamics of nonviolence laid out in Michael Nagler’s handbook to help build a more just, peaceful and sustainable world.