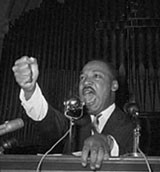 It was announced yesterday that Dreamworks – the company behind Shrek and the recent comedy blockbuster I Love You, Man – acquired the life rights from the King Estate to make a new biopic on the life of Dr. Martin Luther King Jr.

“We are all honored that the King Estate is giving us the opportunity to tell the story of these defining, historic events,” said Steven Spielberg, who is set to co-produce the movie. “It is our hope that the creative power of film and the impact of Dr. King’s life can combine to present a story of undeniable power that we can all be proud of.”

But what part of Dr. King’s legacy is Spielberg proud of?

Will the movie give a taste of Dr. King’s famous speech at Riverside Church in New York City where he called the U.S. government “the greatest purveyor of violence in the world today?” Seems unlikely.

While Hollywood somehow managed to produce a great film on Gandhi in 1982, it’s hard to imagine that they will get this one right.

The radical side of King – the one that fought not only for civil rights, but also against the Vietnam War and for economic justice – has been consistently downplayed or ignored by the mainstream media since his death, because that King continues to threaten the status quo today.

Since this new film will likely reach an enormous audience and considerably shape how the average American sees Dr. King, the peace community should seek a dialogue with Dreamworks and the producers about the script as this project moves forward.

Shaker Aamer and the future of Guantanamo