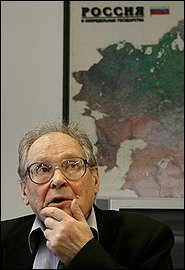 The Washington Post ran a great Associated Press story last week about one of Russia’s leading dissidents, both present and Soviet era.

79 year-old Sergei Kovalyov was, as the AP put it, one of the “human faces of the Cold War, waging nonviolent resistance against a cruel and cynical system.” But despite his “role in breaking the chains of communism,” Kovalyov is considered a pariah by the current government for his unyielding critique of “the new Russia and Vladimir Putin.”

As one political analyst and Kremlin insider was quoted as saying, “Anyone who says anything good about Kovalyov risks being branded a Russia-hater.” But like all good dissidents, Kovalyov’s only concern is speaking the truth. And Russia isn’t his only target for contempt:

In Kovalyov’s view, the West doesn’t realize that hiding behind a democratic facade is an authoritarian country that violates free speech and manipulates elections.

“Your countries are so accustomed to the fact that the law is something to be abided by that you can’t understand a bandit society,” he said in an interview with The Associated Press, earnestly sitting forward in his chair in a Moscow office, his gaze penetrating through owlish glasses.

“You fear the Cold War, but you won it!” he said. “And now you allow this dragon to grow new heads. I absolutely don’t understand why you are doing this.”

Aside from the interesting look at Russian politics and activism, this article also offers a sober reminder that glory is often shortlived in the struggle for justice. “As the Soviet Union headed to dissolution, [Kovalyov] went from persecuted dissident to star of the new liberal order.” But with most critics being ousted under Putin’s reign, he now finds himself feeling “marginalized by the very society he and his fellow dissidents struggled to set free.”

A dissident’s work is never done