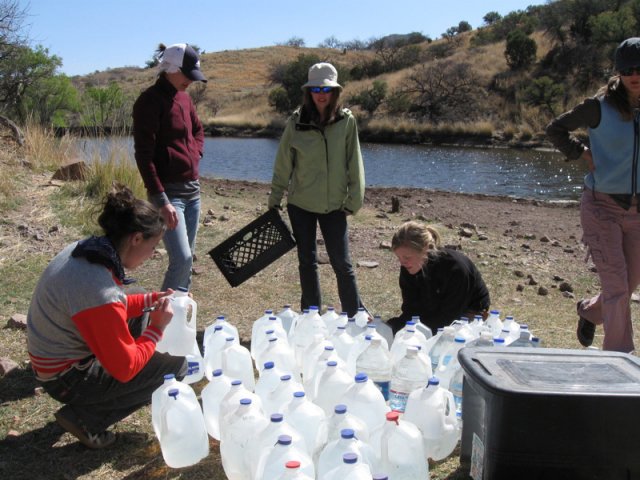 Border activists, along with humanitarian and social justice organizations, are waiting for several government agencies to respond to their request for a meeting, where they hope to address the ongoing prosecution and harassment of aid workers along migrant trails. In last week’s press conference, No More Deaths announced:

[…] we request a meeting between Buenos Aires National Wildlife Refuge (BANWR) officials, the Department of the Interior and humanitarian, human rights, environmental and faith organizations to take place no later than two weeks from today’s date, in order to discuss ways that we can cooperate to prevent additional death and suffering on the US-Mexico border and the federal lands it transects.

Government agencies such as US Fish and Wildlife and Border Patrol have been impeding the work of humanitarian groups in southern Arizona that are working to prevent additional death and suffering by providing water and medical care to those in need. According to No More Deaths:

On two separate occasions, US Fish and Wildlife officers have ticketed humanitarian volunteers for placing clean drinking water along known migrant trails; additionally, BANWR officials have threatened further punitive action against humanitarian efforts on the refuge. At the same time, representatives of BANWR have consistently resisted efforts by humanitarian groups to work cooperatively with the refuge to ensure that drinking water is available for those who need it, in a manner appropriate to the environmental sensitivity of the area.

More recently, according to a Christian Peacemaker Teams announcement:

On 1 June 2009, CPT Reservist John Heid and two other companions placed three-dozen gallons of water on an active migrant trail in Buenos Aires National Wildlife Refuge (BANWR). The three were confronted by a Fish and Wildlife officer, escorted out of the area, and face possible prosecution for littering.

A US Border Patrol helicopter crew spotted the three shortly after they began putting out the water and hovered over them for the next hour. Eventually a Border Patrol agent, armed with an M-16 assault rifle, sprinted down the trail to warn the group that the placement of such containers was a violation of law. The agent then departed (Border Patrol agents do not have authorization to issue citations.) The three continued their work for nearly an hour under constant low-flying helicopter surveillance before encountering a US Fish and Wildlife law enforcement officer, who collected contact information and escorted them off the Refuge. He explained that a determination to prosecute the three would be made within the coming weeks.

The date marked the beginning of the most lethal month of the year in the Tucson Sector of the US-Mexico borderlands.  One hundred degree days become the deadly norm.  This year, migrants crossing this desert are dying at a record rate; eighty-nine bodies have been recovered to date, eight of these from the Buenos Aires National Wildlife Refuge (BANWR).

Aside from the legal harassment and consequences that detract energy and resources from the life-saving work of these humanitarian organizations, No More Deaths has consistently reported finding slashed gallon jugs of water, most likely done by federal agents along the grueling migrant trails. As the Arizona border community strives to find humane and environmental solutions to these conflicts, Congress is poised to make life along the border even more difficult.

The House of Representatives began hearing arguments on the Department of Homeland Security appropriations bill (HR 2892) yesterday. There are three proposed amendments to this bill that would require the construction of an even more inhumane border wall.

With the current death toll nearing 100, the work of groups like No More Deaths to engage one’s adversary in conversation is a trademark of Gandhian nonviolence. Hopefully BANWAR officials will recognize it is also in their best interest to come to the table so that the inexcusable human suffering in the desert can come to an end.

5 protests blooming in Washington this spring