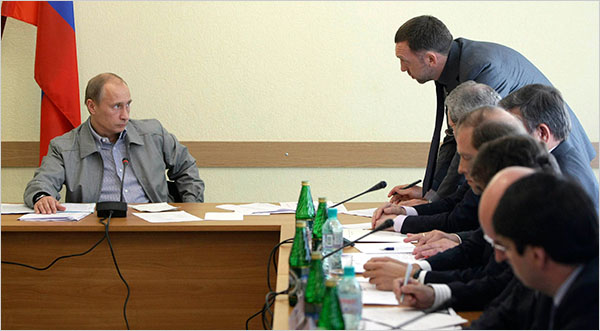 Last Thursday, Russian Prime Minister Vladimir Putin made a surprise visit to the town of Pikalyovo, where two days prior several hundred people blocked a federal highway for six hours to protest job cuts and unpaid wages. The purpose of his visit, however, was not to scold those who took to the streets, but to get the town’s sole factory – which had recently stopped production – running again.

In what sounds like a publicity stunt, Putin chastised Oleg Deripaska, a metals tycoon who used to be Russia’s wealthiest man, and the two other businessmen who jointly own the factory at a meeting that was broadcast on national television.

“You have made thousands of people hostage to your ambitions, your lack of professionalism — or maybe simply your trivial greed. Thousands of people. It’s totally unacceptable,” Putin angrily said during the meeting.

After threatening to nationalize the plant, which was privatized only five years ago, the owners were then forced to sign a contract that would reopen the facility. At the same time, $1.5 million in back wages was returned to the workers, many of whom are now living in desperate poverty.

Nonviolent action may spread in Russia, according to the New York Times, which is feeling the effects of the economic crisis:

As they celebrated, citizens here said they could never have attracted Mr. Putin’s attention if it were not for the protests.

Mikhail Viktorovich Shmakov, chairman of the Federation of Independent Trade Unions, said Thursday that the protest mood was rising in “many one-factory towns,” among them the cities of Tsvetlogorsk and Baikalsk, where 42 employees of a paper mill have begun a hunger strike over unpaid wages.

Svetlana Antropova, the energetic head of Pikalevo’s trade union, was more blunt in her assessment. “Other trade unions should behave like us,” she said.