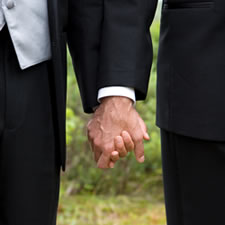 Author and syndicated sex advice columnist Dan Savage wrote an interesting piece this week called “Civil Disobedience: A Proposal.” In it, Savage lays out a plan of action aimed at taking down the Defense of Marriage Act. He says, “It would demonstrate better than another gay march just how seriously we take this issue.”

Here’s the idea: one gay or lesbian couple—a couple currently denied their rights under DOMA—shows up at the entrance to the White House grounds. A different couple every day. They ask to speak to the president about DOMA. They’re refused. They sit down. They refuse to leave. They’re arrested, carried away by the police. Couples would be recruited from all over the country, demonstrating that gay marriage isn’t just an issue in liberal California or godless New England, and the media in each couple’s home city and state would be notified in advance of their arrest. The occasional famous couple—Rosie and Kelli? Ellen and Portia?—would participate to pull in celeb media. But most of the couples who come to D.C. to get arrested would be average folks. The couples would need support, legal and logistical, and we would need someone to organize media outreach and maintain a website. The website would include a photo and profile of each couple that comes to D.C. to get arrested, collect all the press, and be used to recruit couples willing to travel to D.C. and get arrested.

Strategically, the idea probably needs some more fleshing out. First off, getting arrested may not be as easy as just sitting down in front of the White House. Initially it may work. But as more and more people attempt it, police may be told to stop giving activists the attention they want.

A good example of this is the annual School of the Americas protest. In the early years it was easy to cross the line and get arrested. Now, as someone who went to last year’s gathering told me, to get arrested you have to practically pole vault over the special fence that’s been erected for the protest.

Regardless of this possible issue, Savage is really on to something. Imagine if one gay couple got arrested in front of the White House every day for a year–or perhaps longer? Politicians would be pressured in a way that a march or one day of action simply can’t deliver.

The couples would keep coming. Every day an arrest. Drip, drip, drip. Members of the White House press corps would see couples getting arrested every day on their way to work. Gibbs would be forced to address DOMA on a near-daily basis. The president would be asked about the issue again and again.

Then again, as most hardcore activists would probably testify, you can’t take media coverage for granted. What if the White House press corps ignores the action, as they have so many others? Witness Against Torture held a vigil in front of the White House for Obama’s first 100 days in office. They got some decent press coverage, but Helen Thomas never came out to interview them.

If gay rights activists are seriously considering this plan, they need to think through these weaknesses, as well as come up with Plan B’s and Plan C’s for whatever unexpected obstacles may pop up. For now, though, I think it’s good enough to commend Savage for simply bringing the tactic of persistence to the table.

A quick study of the most successful nonviolent movements shows that persistence is a key factor, see the civil rights movement or the Indian independence movement. It would be wonderful if gay rights activists embraced this strategy, but it’s also something for other justice movements to consider as well.

Every donation funds the next article.

Why training women in nonviolent resistance is critical to movement success

Inside the battle for trans care in New York

What would it take to repeal the Defense of Marriage Act?