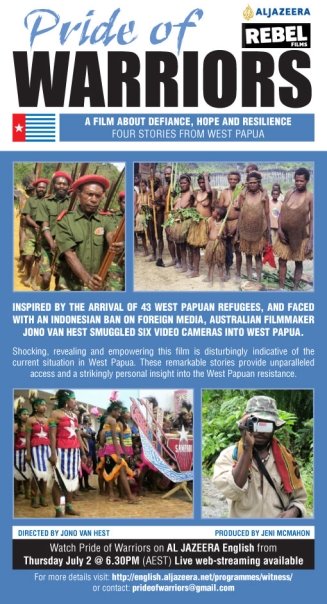 Only days before it was set to premier on Al Jazeera English earlier this month, a new film on the nonviolent movement in West Papua was pulled off air by the Qatar-based TV channel – apparently at the behest of the Indonesian government.

Called “Pride of Warriors,” the documentary was inspired by the arrival of 43 West Papuan refugees in Australia in January 2006.

According to Jason MacLeod, a lecturer at the University of Queensland’s Australian Centre for Peace and Conflict Studies, who has viewed the film:

Faced with an Indonesian ban on foreign media, [Australian filmmaker Jono] van Hest smuggled six video cameras into West Papua. The result of this unparalleled access into the West Papuan resistance is a film that gets behind the media headlines to give an upfront and personal account of nonviolent resistance in West Papua.

The film tells the stories of four individuals: Yani, the daughter of an independence leader, who was kidnapped and tortured because of her father’s nonviolent political activity; Matias Bunai, a customary leader from Paniai who is fighting to keep his culture alive; the rebel leader Tadius Yogi who has put down his guns and now advocates a peaceful solution to the conflict; and a group of young dancers who were interrogated by the Indonesian security forces for performing a dance.

By refusing to screen his film Al Jazeera has come down on the side of a withering of democracy. When it is eventually premiered, Pride of Warriors promises to blend the best of art, politics and investigative journalism. The very act of filming is itself a story of nonviolent action and solidarity with a people determined to be free, highlighting the power of the video camera as a tool for liberation.

In the Jakarta Post, Ary Hermawan suggests that the film was canceled, or at least postponed, because the presidential elections were approaching on July 8, and the Indonesian government saw the documentary as threatening.

While it’s perhaps not surprising, I guess this is just evidence that when it comes to being critical of Muslim countries, Al Jazeera is not as independent as you’d hope.