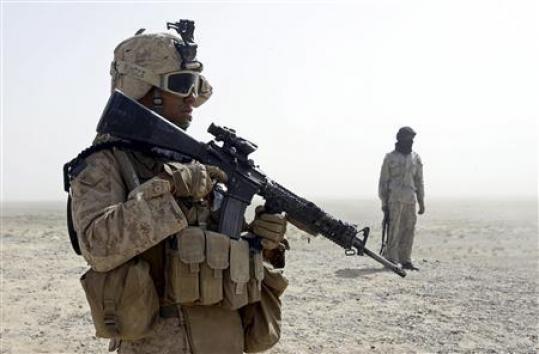 Capt. Drew Schoenmaker, who heads the Bravo Company of the 1st Battalion, 5th Marine Regiment, described the four thousand strong Marine attack in Afghanistan yesterday morning as an effort to “forge new ground … We are going to a place nobody has been before.” The Marine attack, labeled “Operation Strike of the Sword,” aims to remove (kill, maim or capture, I suppose) fighters from southern Afghanistan’s Helmand province before the August 20th presidential election. Strike of the Sword, fortified by the Air Force and 650 Afghan troops, is the largest Marine offensive strike since the Vietnam War.

I respectfully disagree with Capt. Schoenmaker. In choosing a military strike, we walk a well-worn and bloody path. We, as well as other nations and armed political movements, have been there before and the results have been disastrous. Susan Galleymore, in her book, Long Time Passing: Mothers Speak About War & Terror, well documents the horrifying effects of war making on Afghani women and children. She opens her chapter on Afghanistan, “You Were Never Hidden from My Eyes,” with a transcribed clip from a 2008 video conference between President Bush and, among others, U.S. military personnel in Kabul:

I must say, I’m a little envious. If I were slightly younger and not employed here, I think it would be a fantastic experience to be on the front lines of helping this young democracy succeed. It must be exciting for you … in some ways romantic, you know, confronting danger. You’re really making history, and thanks.

Earlier this month, I joined a CODEPINK delegation to deliver humanitarian aid to Palestinians in the Gaza Strip. Joining the delegation was Hunter “Patch” Adams, M.D., who taught us the practice of clowning as a method of nonviolent transformation. One evening, as he spoke to the delegates about his work, he showed us a film he had made with a troupe of Italian clowns. He and the Italian clowns had traveled from Rome to Kabul in order to serve the sick, the starving and the wounded in hospitals there. In one of the film’s scenes, a doctor—using the most rudimentary of medical instruments—was picking off the charred remains of a four year-old girl’s burnt skin. She was a beautiful child, though most of her body had been badly burned in a war-related injury. As the doctor gently worked his gruesome task, she whimpered and wailed in distress. The mother, holding her in her arms, remained silent. Only the tears that were streaming down her face revealed her agony.

Patch also spoke of seeing three children in one bed; they fit in one bed because they were emaciated. Toward the end of the film, one of the clowns coaxes a seven year-old girl to walk with him; it was difficult work for her on the artificial leg she used to replace the leg that had been blown off by a land mine. Perhaps it is nonviolent activists who must take up the phrase, “If all can’t dance, I don’t want to be in your revolution” and use it as the measure of right action.

Galleymore, through her interviews with Afghani women now living in the United States, learns that Afghanistan has the highest maternal mortality rate in the world; the average GDP per capita is about $800, and that the number of widows is estimated to be about 60% of the total population. In my estimation, to “break new ground” in Afghanistan would mean that we would actually listen to what they want and need and actually deliver that. Robert Daar, author and human rights activist in Afghanistan for the past thirty years, says as much to Galleymore:

The Americans propose to increase troop level and talk about their successes there. I’m of the view that we should give them help, but for what they ask for … The sad fact is that if we hadn’t have been so involved with the military side of this operation, in time the majority of people would reject the emptiness of the Taliban, as there is a lack of support for this kind of Islamism and fundamentalism.

All of the Afghan women interviewed in Galleymore’s book had suffered from war and did not want another war: “No more war. We’d like peace. As a mother I know how war affects everyone, especially the families.” So that we might truly “go to a place we have never been to before,” we might do well to start listening to these women. We might start to take the practice of nonviolence seriously. We might ask that our national leaders visit the sick and dying in Kabul, as did Patch and the Italian clowns, and in Helmand province. We might ask that they take our lives seriously and stop, in Dr. Martin Luther King’s words, the “demonic suction cup of war” from siphoning off monies that are needed for our schools, our health care and our jobs.

Gene Sharp — the lonely scholar who became a nonviolent warrior