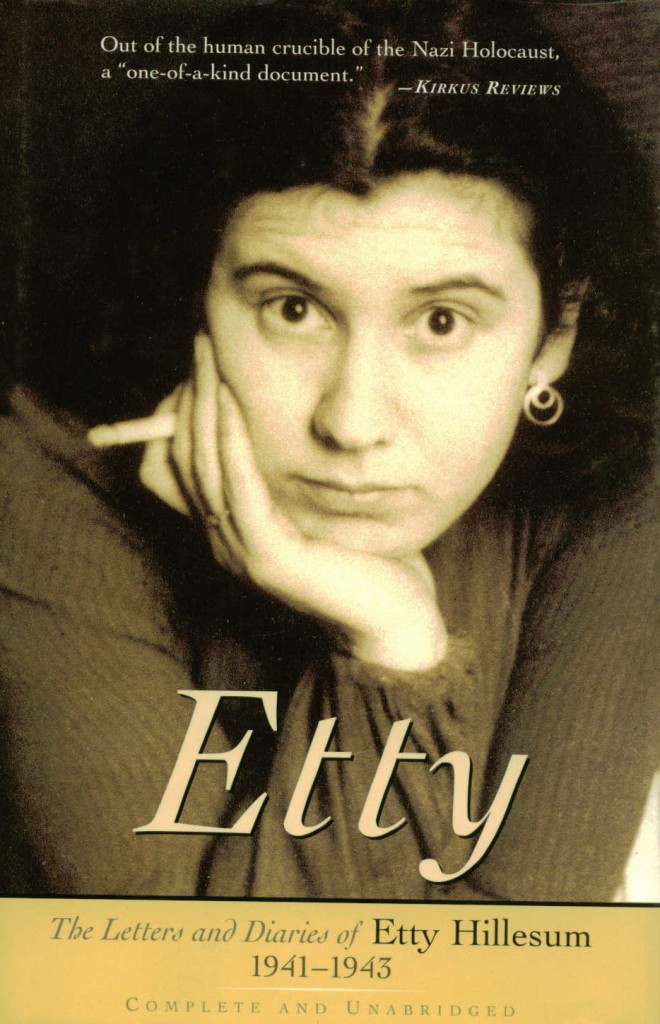 On July 10th, 1943, Etty Hillesum, a young Dutch Jewish woman interned in Westerbork, sent yet another of her deeply thoughtful letters. In this particular letter, sent to a dear friend, she writes:

It is not fear of Poland that keeps me from going along with my parents, but fear of seeing them suffer. And that, too, is cowardice.

This is something people refuse to admit to themselves: at a given point you can no longer do, but can only be and accept. And although it is something I learned a long time ago, I also know that one can only accept for oneself and not for others.

I have never been able to “do” anything; I can only let things take their course and if need be, suffer. This is where my strength lies, and it is a great strength indeed. But for myself, not for others.

Hillesum, who was only 29 years old when she died in Auschwitz in November of that same year, determined that she would be the “thinking heart of the barracks.” In her journals and letters, which are now published for English readers in Etty: The Letters and Diary of Etty Hillesum, 1941 – 1943, we find a daunting yet luminous account of how to respond humanely to a culture of death. Hillesum invites her reader into the daily work and struggle of a life devoted to authentic hope, compassion for others, and a courageous engagement in nonviolence.

In November of 2000, I participated in a Bearing Witness retreat sponsored by the Zen Peacemaker Order in the concentration camps of Auschwitz and Birkenau. In a quiet and solitary moment, I knelt on the grounds of Auschwitz and asked Etty to be my teacher and guide, for I was on her ground now. It seems to me that Father Daniel Berrigan, in his own way, made a similar request of Hillesum. He expresses this beautifully in his poem, “Etty Hillesum,” which reads, in part:

“Here goes then,” wrote the woman I never heard of
And, “I don’t want to be safe, I want to be there.”
Wrote this woman …

The ineffaceable likeness. Death
her child, her semblance.
Wrote, “In such a world I must kneel down. Kneel down.
But before no human. In the furnace
lust and its cleansing, birth and its outcome.
To kneel where the fire burns me, bears me.
Eros, God, Auschwitz …

She wrote: “To live fully
outwardly, inwardly, my desire. But to renounce
reality for reality’s sake, inner or outer life —
quite a mistake …

The woman at the well, according to the Gospel of Saint John, asked that Jesus allow her to drink the water of life just once so that she would not be left thirsty nor have to return to the well again. In August of 1943, Hillesum, writing to another friend from Westerbork, related a conversation that had taken place within the camp: “When I went into the hospital barracks, some of the women called out, ‘Have you got some good news? You look cheerful.’” “Good news” would typically mean that one’s call to be “transported” to Auschwitz had been put off, that the war was soon to end, or that folks would soon be released from the camp. But for Hillesum, the reason for her good cheer had simply been the sighting of a rainbow in the camp earlier that morning. Her ability to see the rainbow and to reflect its radiance was grounded in a diligent practice of self reflection and prayer begun just over a year before she entered Westerbork. Hillesum, once could say, no longer needed to return to the well. She saw clearly that within her—and each of us—flow the living waters of life. As she put it in an early journal entry: “Life itself must be our fountainhead, never something or someone else.”

Jan Gaarlandt, in his introduction to An Interrupted Life, an abridged version of Hillesum’s letters and diaries, opens his remarks by noting that her journals and letters were written in Holland between the years 1941 and 1942. He then comments, “Those were the very years when the scenario of extermination was being played out all over Europe. Etty Hillesum was Jewish and she wrote a counter scenario.” Hillesum’s writing of a counter scenario, one of the greatest gifts she has bestowed upon us, was an act of responsibility and resistance. In our own “worst of time,” might we, too, come to see through the monolithic posturing and claims of empire’s narrative? Might we come to see, like Hillesum, that we must choose to love and not to hate?

While Hillesum learned to love herself through her practice of writing, she learned to love others through the practice of community building. In an early journal entry, we find that Hillesum began the work of community building in Amsterdam, where she lived prior to her entry into Westerbork. In a dwelling that consisted of Jews and Christians, Germans and Dutch, students and widowers, she worked not only to preserve the community but to ensure that its members flourished through one another. The task, even in this small and local community, was difficult at times:

Ours was and is a bustling little world, so threatened by politics from the outside as to be disturbed within. But it seemed a worthy task to keep this small community together as refutation of all of those desperate and false theories of race, nation, and so on. As proof that life cannot be forced into pre-set molds.

Hillesum’s worthy, yet modest task of community building well served those she later came to meet in Westerbork. It seems modest, I suppose, to practice nonviolence within one’s own community when a war of extermination is being waged. However, even amidst the Nazi storm, Hillesum was able to hold her ground, to keep doing what she had always been doing. She did so by simply comforting those in need: “When hungry children [in Westerbork] started crying, I would go over to them, stand beside them protectively, arms folded across my chest [and] force a smile from those huddled, shattered scraps of humanity … And all I did was just stand there, for what else could one do?” In “just standing there,” however, Hillesum stood on the side of humanity, on the side of life. Her modest effort was simply, as Berrigan puts it in his “Zen Poem,” to refuse to belittle, refuse to hate, and refuse to kill. When I contemplate what she did, I once again hear Berrigan’s poetic cry of praise, “O, Woman at the Well!”

Though in Westerbork, in the midst of so much death, Hillesum had every reason to shut down. It was precisely at this moment, however, that she chose to widen the community of those she loved. This is the moment that she vowed to be the “thinking heart of these barracks” and then, “the thinking heart of the whole concentration camp. In the years prior to this vow, she found that she had little time to complete the daily tasks of life and to be present to others. She realized that the feeling of “not having any time” was not so much literally true as it was more an indication of her chaotic and fragmented inner state. Now, near the end of her life, when she had only a few months left, she found that she had “all the time in the world” to talk with others, to be present with them.

In the building of community beyond “her own,” Hilesum put to good use the interior work, prayer and nonviolent practice that she had committed herself to in the prior year. In the circle Hillesum had drawn, no one was excluded. She was able to say, even while interned in Westerbork: “I feel at home. I have learned so much about it here. We are at home!”

Hillesum often jotted down the phrase, “to live fully.” She came to see, paradoxically, that to live fully required the acceptance of suffering and death. It is this acceptance that curbs the human propensity to inflict upon others what we refuse to accept ourselves, such as suffering. Acceptance, in the way that Hillesum understands it, is far removed from a stance of indifference or passivity; Hillesum gave all that she could to be in service to others. What she’s getting at is the interior ability to hold both suffering and joy all at once and to not diminish either. It’s the third way, in other words, that nonviolence asks of us.

By all accounts, Hillesum was a radiant presence inside the camps, an incandescent light amidst the dark night of Nazi terror. In honor of her work and her light, perhaps we might “find the time” today to pick up the practice of interior clarity and community building that Hillesum has left for us; perhaps we, too, may pledge to be the “thinking hearts” within our own communities.

An Urgent Call from the West Bank