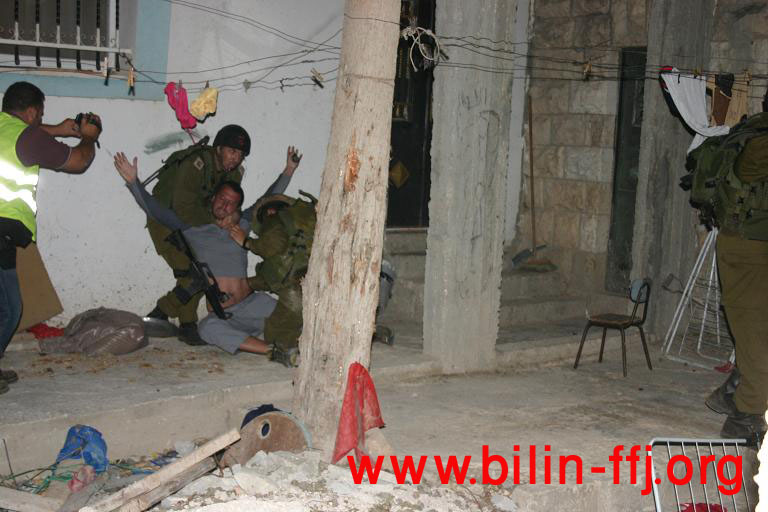 I received an email this morning from Bi’lin’s Popular Committee Against the Wall and Settlements telling me about a 3 am attack on their village by approximately 100 Israeli soldiers and border police. Homes were raided and two residents were arrested, including one American activist. The invaders eventually retreated, however, when a group of Palestinian, Israeli, and international nonviolent activists, numbering close to 100, started following them around the village and blocking their attempts to enter more homes.

Unfortunately, such attacks are commonplace in Bi’lin. Over the past two weeks soldiers have broken into homes, where they have harassed small children and made nine arrests, including a 16 year old. This is done to discourage the popular nonviolent protests against the separation wall and expansion of illegal settlements. Internationals have aided in several “de-arrests” by stepping between soldiers and young persons about to be apprehended. But more help is needed. The Popular Committee is asking “Israeli and international activists to keep coming to the village in the following days, in order to resist further army invasions.”

While this desperate plea and news from half a world away reaches the inboxes of other activists and supporters like myself, most media outlets will be busy reporting on the death of a pop star. The New York Daily News is running a forty-page spread on the life and career of Michael Jackson, as if round-the-clock media coverage the past one and a half weeks has not been enough to sate anyone’s curiosity and interest.

Nevertheless, 1.6 million people registered to attend Michael Jackson’s funeral in Los Angeles today. Of those 1.6 million, only 17,500 were able to get the highly coveted ticket. I have a suggestion for those not able to attend the funeral: How about on Tuesday if we all call our Congress persons or the White House and ask that Israel desist from its attack upon the people of Bi’lin? That would amount to 1,582,500 calls on behalf of the people of Bi’lin and the nonviolent protest they have waged each Friday for the past three years. A day on which over a million people called on behalf of people who are waging a nonviolent struggle would be a day that could change the course of history for the better.

In Buddhist practice, it is only a matter of time before a student must come to terms with the “hungry ghosts” of his or her being. These ghosts—manifest in greed, jealousy, addictions and compulsions—are imagined as beings whose “mouth is the size of a needle, though their stomach is the size of a mountain.”  While their hunger is intense, they can never get enough food. In the compulsive media coverage over Michael Jackson—his exceptional talent notwithstanding—I often wonder what “hungry ghost” is devouring us? Further, as we are dragged to and fro in the frenzy of the coverage, what else is going on in the world that warrants our complete attention?

Gilad Atzmon, whose writing has been excerpted in the most recent edition of Adbusters, speaks to what demands our attention in his article, “The Terror Within.” Though he speaks to his Israeli countrymen and women, those of us in the United States—whose close to $3 billion annually in tax dollars and whose weapons were used, most recently, to kill close to 1,400 Gazans in just three weeks—may also wish to pay attention to what he says. Writing of the December 2008 – January 2009 attack upon the Gaza Strip, Atzmon states:

The IDF campaign in Gaza enjoyed the support of 94% of the Israeli people. They watched the carnage on their TV screens as one of the strongest armies in the world quashed women, elderly people and children. They saw blizzards of unconventional weapons burst over schools, hospitals and refugee camps. And yet they didn’t do much to stop their ruthless ”democratically elected” leaders. Instead, some of them grabbed a seat and settled on the hills overlooking the Gaza Strip to watch the army turn Gaza into a modern Hebraic Colosseum of blood. Even now when the campaign seems to be over and the scale of carnage in Gaza has been revealed, the majority of Israelis fail to show any signs of remorse … This level of group barbarism cries for an explanation. How is it that a society has managed to lose its grip of any sense of compassion and mercy?”

In early January of 2009, the US Congress resolved overwhelmingly to support Israel to defend itself from attacks coming from the Gaza Strip (House) and to defend itself from terrorism (Senate). Ira Chernus, in his article, “Israelis Get the Truth about the Gaza Attack,” speaks to why our Congress would do well to add “wisdom” to the “sense of compassion and mercy” Atzmon advocates:

The justification Israel offers is the increased firing of rockets from Gaza. But Israelis can read that Hamas is responding to Israeli provocation. “Six months ago Israel asked and received a cease-fire from Hamas. It unilaterally violated it. On November 4, an Israeli operation sparked a new round of dangerous, if controlled, violence, when it unnecessarily bombed a tunnel.

About the same time, Israel cut off transport of food, medical supplies, and electricity to Gaza. Food insecurity in Gaza currently runs at 56 percent and is deteriorating rapidly, 42 percent of the Strip’s population is unemployed and 76 percent is receiving humanitarian assistance (all UN figures). A million and a half human beings  live in the conditions of a giant jail.

The Congressional vote, in other words, lacks intellectual honesty and integrity. Further, like the Israeli population described by Aztmon, there seems to be no remorse for those who were killed even though we supported the effort with the Congressional vote, with our tax dollars and with our weapons. How is it that the rockets launched by Israel and the United States are any less “terroristic” than those launched by Hamas and other armed groups? Tom Cordaro, in his book, Be Not Afraid: An Alternative to the War on Terror, offers one explanation. When writing about the “terrorism of the strong”, i.e. nation-states, he notes (with specific reference to the United States):

Because those who engage in the terrorism of the strong often have at their disposal many social, economic, cultural, and political levers of institutional power, they can commit their acts of terrorism under the guise of legitimacy and legality. This might explain why the FBI’s definition of terrorism includes the caveat that terrorism is the “unlawful use of force or violence.” Or why the State Department’s definition restricts terrorism to “sub-national groups or clandestine agents,” conveniently eliminating the possibility of nation-states, like the United States, might be guilty of terrorism.

The Popular Committee of Bi’lin, as well as other Palestinian and Israeli peace activists, believe that the attack upon the Gaza Strip is a harbinger of what’s to come for those Palestinians living in the West Bank. This is one reason why, among others, that we must pay attention to what’s happening right now in Bi’lin and to support the nonviolent efforts of its people. On Tuesday, let’s be one of those 1.5 million people to make that call to our Congress people and the White House—or creatively organize—on behalf of the people of Bi’lin. It is certainly a meaningful way to honor all of those who have struggled and who continue to struggle to “count” as a human being and who strive to bring about justice and peace for all.

Forest Service seeks to silence Smokey the Bear over fracking

An Urgent Call from the West Bank