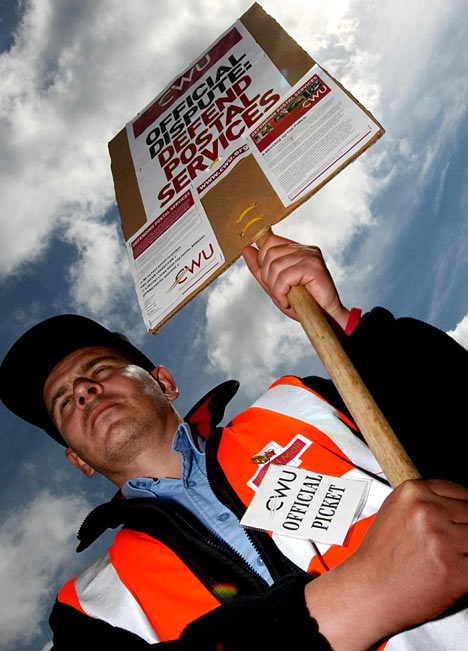 How many workers have gone on strike in the U.K. this year and how does that number compare to recent years? Well, it turns out the British government has kept close track of these kinds of things, and the numbers are pretty shocking. According to Bloomberg News:

In the year through May, 352,000 workers went on strike, continuing a surge that began last year as government-funded workers challenged a clampdown on pay increases. In the year to May 2008, 638,000 workers took industrial action, according to the Office for National Statistics. That compares with the annual average of 201,600 through the 1990s, it said. That’s below the 1980s annual average of 1.04 million.

The article also managed to collect estimates of the financial toll of several recent strikes, which clearly demonstrate just how challenging such nonviolent action can be to both governments and corporations.

Strikes by British government workers this summer, protesting a squeeze on public spending, may end up costing at least 400 million pounds ($658 million), with the latest action by postal workers starting today.

Protests in 2007 at the government-owned mail carrier cost the London economy 300 million pounds, according to the city’s Chamber of Commerce. In June, a two-day London Underground strike cost the economy 100 million pounds, the chamber said.

A protest over the use of foreign workers at a Total SA site in eastern England cost the company 100 million euros ($141 million) in extra costs after a June settlement, said the company, Europe’s largest oil refiner.

How do these numbers compare to the United States? After a little digging, I found that the Labor Department’s Bureau of Labor Statistics does keep track of what they call “major work stoppages,” which include lockouts and strikes that involve more than 1,000 workers. Limiting their records to such large actions no doubt dramatically undercounts the number of workers who go on strike in the U.S. every year, but the official statistics are still quite telling, especially when compared to figures from Britain. According to a Department of Labor press release from February, “Major work stoppages idled 72,000 workers for nearly 2 million work days in 2008.”

But why are so many more workers willing to strike in Britain than the U.S.? One place to start in looking for an explanation is the state of organized labor in both countries. As the Bloomberg article points out: “Currently, 29 percent of workers [in the U.K.] belong to a union, including three in five workers in the public sector and one in five at private companies.”  Union membership in the U.S., on the other hand, peaked at 36 percent in the mid-1950s and has since fallen to dismal levels. According to the U.S. Bureau of Labor Statistics, 12.4 percent of the overall workforce and only 7.6 percent of the private sector was unionized in 2008.

‘An interested and engaged party’ — WNV on WBAI’s OWS Radio

Strikes far more common in the U.K. than the U.S.