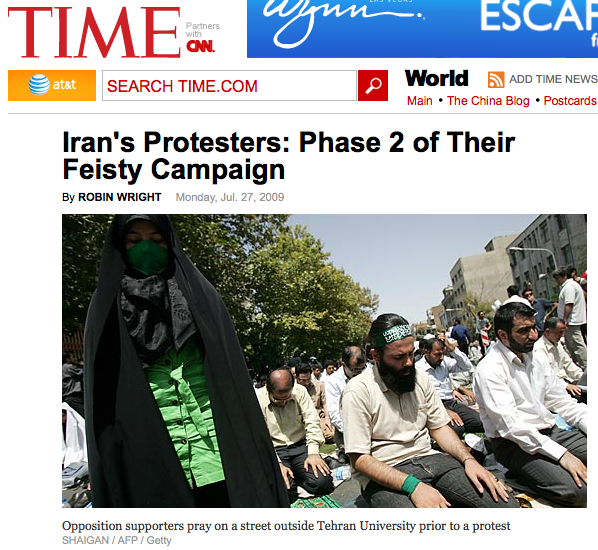 According to Time magazine, “Phase 2 ” of the Iranian protest movement has begun.

Six weeks after millions took to the streets to protest Iran’s presidential election, their uprising has morphed into a feistier, more imaginative and potentially enduring campaign.

The definitive tone of this proclamation is very interesting. For starters, the article doesn’t exactly explain why “Phase 2 ” has begun at this particular moment. Other mainstream media outlets have made similar claims over the past few weeks. And much like the others, Time seems to be relying on wishful editorializing more than concrete reporting.

Tactics may be evolving to deal with the crackdown on mass street protests—such as the boycott of goods advertized on state-controlled television, attempts to overload the electrical grid and “blitz” street demonstrations—but there is little sign of them having any kind of effect on the Iranian regime. And, therefore, it’s hard to imagine a “potentially enduring campaign” emerging.

Furthermore, the situation seems to have changed very little from when it started over a month ago. Back then, Middle East expert and foreign policy analyst Stephen Zunes described the protests as “scattered” and “lacking in discipline.” Time calls “Phase 2 ” as “unorganized” and “largely leaderless.” The only difference between these two descriptions is the conclusion that follows. For Zunes, a scattered and disorganized protest movement is “easily suppressed,” whereas for Time it’s “only just beginning.” Except that it’s not. How can it be the beginning if it’s Phase 2?

Such nonsense is only further evidence that the mainstream media is practically willing a protest victory in Iran. A realist such as Zunes—who has also expressed his support for the protesters—sees critical holes in their movement. He has suggested that a more cohesive and strategic movement could emerge if a general strike were employed.

The thinking behind this is not complex. If repression is so strong that public protests are impossible and small covert street “blitzes” aren’t having a real effect either, you have to consider a tactic that is both large, like a public protest, and anonymous, like a street blitz. A general strike, where everyone stays home—and thereby shuts down the daily workings of the country—is that tactic.

General strikes have been mentioned and even planned by the Iranian opposition. Mousavi has called for one at least twice by my count, but they never seem to develop. I’ve seen little speculation as to why, but my hunch is that it relates to another overlooked point by the mainstream media: not everyone has reason to join the protests.

Again, much like the other mainstream outlets, Time is comparing Iran’s protests to Gandhi and King-style civil disobedience. But there is actually little similarity, not just in tactics, but in spirit. As Iranian-American human rights analyst Rostam Pourzal noted in Foreign Policy In Focus several weeks ago, the opposition movement, as led by Mousavi, is far from representing the interests of the poorest, most oppressed and marginalized in Iranian society.

The movement openly aims to overturn affirmative action programs and other “unfair benefits” enjoyed by less privileged Iranians. Judging by its literature, the opposition defends primarily the interests of Iranians who either aim for or already enjoy white-collar status. More often than not, this constituency has felt betrayed by the Islamic Republic for three decades.

While Ahmadinejad could never be considered a benevolent ruler, he has maintained a rather populist agenda, supporting programs that help the lower class. Mousavi on the other hand has aligned himself with noted politicians who oppose government spending on subsidies and social welfare. To this, Pourzal says, “Martin Luther King, Jr. would not likely approve of such a position.”

This may very well be why the opposition has largely failed to draw enough support for a general strike and otherwise gain serious momentum. Unless they ditch Mousavi and make their demands less about election results and more about social reform, the protest movement will likely whither away. Again, to quote Pourzal:

Judging from what I hear during frequent trips in Iran, citizens of nearly all backgrounds, including the president’s supporters, want more social freedoms and political choices. But a great many are not willing to live without the services they have come to expect from their government or abandon the current leadership’s foreign policy.