When a private security company launched an experimental floating surveillance camera over Port Huron, Michigan two weeks ago, Canadian activists opposed to the invasion of their privacy quickly organized a “moon the balloon” protest. The action occurred on Saturday and saw around 300 people gather at the St. Clair River international boundary, drop their pants, and aim their rears skyward.

Unfortunately, the high tech camera, which is “capable of identifying the name on a ship 12 to 15 kilometres out in Lake Huron,” was apparently grounded at the time of the protest for repairs. But that news didn’t discourage the protesters.

“If the balloon’s sitting on the ground or it’s in the sky, the fact is that they’re still using it,” said Eli [one of the organizers].

“It still needs to be said that we don’t think it’s necessary, that we think it’s a potential invasion of privacy and of sovereignty.” 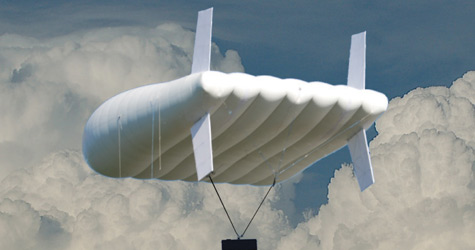 Sierra Nevada Corp., the makers of the balloon, have said they are only conducting tests and that “the transmission will shut down anytime it passes a building.” Of course if their tests succeed, Sierra intends to sell the technology to the US Department of Homeland Security, which doesn’t exactly have a good track record when it comes to avoiding the temptation to spy on its citizens, particularly peaceful antiwar groups.

Sierra also has a rather interesting history working on technologies that are planned for use against non-combatant civilians. Aside from its work on the Air Force’s Predator Drones, the company has also helped develop a “non-lethal” device known as MEDUSA (Mob Excess Deterrent Using Silent Audio) that has the ability to make people feel as though their skin is burning.

The Pentagon has been as up front as to say that it will be tested on “American citizens in crowd-control situations.” But a 60 Minutes segment that ran last year, showed rather shockingly what is meant by “crowd-control.” Military personnel posing as peaceful protesters—carrying signs that read “Love for All” and “World Peace”—were the demonstrated target.

It doesn’t appear as though the bare-assed Canadians were aware of these connections when they staged their “moon the balloon” protest. But that’s all the more reason we should be watching their backs.

The beauty of COP21 is in the street

A conservative who was right about Occupy