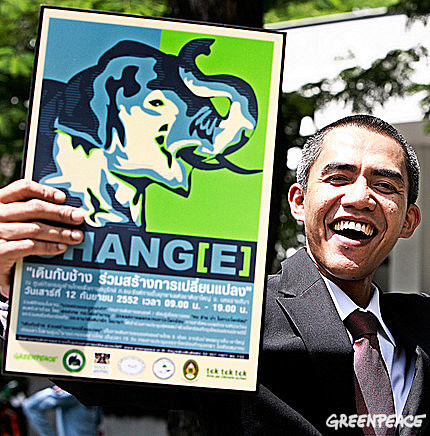 The Yes Men aren’t the only ones who can pull off a great prank to raise awareness for climate change. Greenpeace Southeast Asia found an Obama lookalike to give a rousing speech on climate change at the US Embassy in Bangkok, Thailand last weekend. According to Greenpeace, the speech was meant as a “call on world leaders to act on climate change, ahead of the climate session of the United Nations General Assembly” taking place today.

The 34-year-old Indonesian Faux-bama made the kind of bold statements climate activists have hoped to hear from the American president since he took office:

Few challenges facing the world are more urgent than combating climate change. Many of you are working to confront this challenge. I am committed to working on this with you.

I will attend the Copenhagen Climate Summit.

I will ensure an ambitious, fair and binding global climate treaty.

I will make funds available for climate mitigation and adaptation, starting with funds to protect the remaining forests.

This is our chance to build a new future for our children. I will not let this moment pass us by.

This clever media event is just one of the many Greenpeace Southeast Asia has staged recently to push for dramatic and timely legislation at the UN Climate Summit. It launched a march called The Chang(e) Caravan, which is being led by five rehabilitated Chang elephants.

The Caravan is traversing Thailand’s Central Plains to tell the story of climate change impacts on communities there, and by doing so increase the pressure on world leaders to act on climate change.

To learn more about the caravan, check out the Greenpeace Southeast Asia blog. There are a bunch of great pictures of elephants shooting water from their trunks.

The successes and failures of South Africa’s student movement