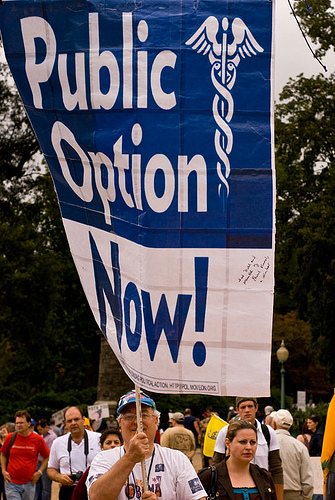 During Saturday’s questionably large “Tea Party” protest in DC, a counter protester marched through the sea of angry conservatives with a sign that read “Public Option Now.” He was greeted with boos, cries of communism, spit and physical violence—most of which can be seen and heard on this video clip.

Now what about the purported tens of thousands gathered to oppose Obama’s health plan? You might be wondering why this site largely ignores such protests waged by “tea-baggers” and “town hallers”. Well, here’s the explanation…

For one, we do not consider their protests to be nonviolent, even the ones that don’t involve the presence of assault rifles or incidences of finger maiming. While there can be very legitimate reasons to protest government spending (e.g. the defense budget) or even Obama’s health plan (on grounds of bowing to the insurance companies), these protests are rooted in selfishness and greed, not empathy, which is a key component of nonviolent resistance.

Secondly, it’s not hard to find coverage of these protests. According the Pew Research Center, an astounding 62 percent of all cable news coverage was on the health care debate.

The folks at Media Matters painted an even clearer picture of this lopsided scale on their blog yesterday:

Behold the media’s glaring double standard. Today, the [Washington] Post puts the “tens of thousands” of Obama-hating tea bagger protesters on A1; makes it the lead story as a matter of fact.

Back in 2002, when more than 100,000 anti-war protesters gathered in the nation’s capitol to protest the Bush administration, the same WashPost… put the story not on the front page, but in the Metro section with, as the paper’s ombudsman later lamented, “a couple of ho-hum photographs that captured the protest’s fringe elements.”

In that light, our mission here at Waging Nonviolence couldn’t be clearer.

Gathering of the ‘bags