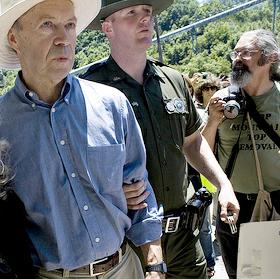 There’s a great Q&A with NASA climate scientist Dr. James Hansen in the latest issue of Earth Island Journal in which he addresses his involvement in recent nonviolent direct actions against the coal industry. Some have criticized him heartily for this decision. The New York Times ran a piece back in July questioning whether Hansen still matters because of his recent activities. But the following explanation for his turn toward activism shows he has a far better grasp on the reality of change than his opponents or even his colleagues in Obama’s cabinet—Science Adviser John Holdren and Energy Secretary Steven Chu—for that matter.

I want to turn to your recent role in some big civil disobedience climate protests: the Capitol climate protest in DC last March, and the protest this past June in West Virginia against mountaintop removal coal mining, where you were arrested for the first time. How did somebody who has worked inside the system for so many years get to a place where you decided that you not only had to be out in a protest but that you were going to get arrested?

I prefer the phrase “civil resistance” rather than “civil disobedience” for reasons that Gandhi gives.

When I give a talk on this, I show that the three options for getting the actions that are obviously needed are through the democratic process, influencing the elections of the administration and Congress; secondly, the courts; and then thirdly, civil resistance.

The first at the top of the list, the democratic process: Well, we’re trying that and you have to continue [trying]. It’s very disappointing that the democratic process ends up with the same old politics, which is exactly what Waxman-Markey is. It does not do the job and it is selling short young people and future generations. And that has gotten to be very frustrating to many people, including me.

And so, you look at these other things, the courts and civil resistance. The courts: In my talks, I draw attention to the fact that it has long been a basic tenet in our democracy that the current generation is using nature and the property that we have inherited from our parents in what Thomas Jefferson described in his letter to James Madison as “in usufruct.” Meaning that it’s in trust, it’s property that belongs to future generations, and we’re obligated to deliver it in equally good condition as we received it from our preceding generations. Jefferson was thinking especially about the quality of the land and that you can’t degrade the land with agricultural practices that just use up the nutrients and leave nothing for future generations. So that, I think, may provide a basis for the courts coming to the assistance of young people and future generations. But I don’t know how well that will work out.

So then we arrive at [civil resistance]: I think the point is – just as Gandhi did – to try to draw attention to what is just and what is unjust. It is kind of a last resort, but the problem is we are running out of time. That is what science has made very clear. It is very hard for people to understand this because the magnitude of global warming is so small in comparison to weather fluctuations, and yet what has become clear in the last few years is that it doesn’t take a very large global change in order to have enormous implications in the long run.

Do you think, then, that more people should start getting involved in civil resistance, in particular when it comes to stopping coal and mountaintop removal mining?

Yeah. We have got to get Obama to pay attention to this because, as I say, I think he is our best hope. But so far, he seems to be forgetting his obligation to young people.