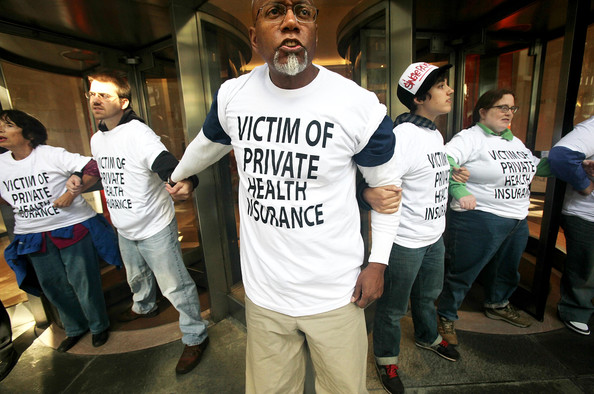 As the debate in Congress continues over health care reform, activists are continuing to put the pressure on. In a new article at The Nation, Peter Dreier writes that momentum for reform is growing, with groups like Health Care for America Now (HCAN) and MoveOn having organized hundreds of protests in front of insurance company offices around the country, at the homes of insurance company CEOs, and at the annual conference for America’s Health Insurance Plans (AHIP) in Washington, D.C. over the last month, calling for a robust public option.

Rather than simply providing an alternative to the private insurance, other organizations – like the California Nurses Association, Physicians for a National Health Program, and Mobilization for Health Care for All – have continued to fight for a universal single-payer health care system that would get rid of insurance companies altogether. Over the last month, more than 100 people have risked arrest at sit-ins at the offices of  insurance companies in New York, Chicago, Boston, Philadelphia and Minneapolis.

Today, the next wave of “Patients Not Profits” sit-ins – organized by Mobilization for Health Care for All – begins, and will continue until at least November 4. Currently, sit-ins are organized in 21 cities over the next few days. If you’d like to participate, check out their website to see if there is an action near you. And if you’re city isn’t listed and you want to help organize a sit-in, email organize@mobilizeforhealthcare.org with “Local Leader / Your City & State” in the subject and be sure to include your phone number in the email.

In recent weeks, the debate seems to be shifting. Congress appears to be standing up more forcefully for a public option, even though Obama has been missing in action. However, there is every reason in the world to enact a far more serious overhaul of our system than is currently being discussed in the mainstream. If we want to get single-payer we still have a very long way to go. Unless there is a real surge in nonviolent action that seriously disrupts business as usual, it’s hard to imagine single-payer even being put on the negotiating table. But we can’t stop fighting for it.  Joining one of these sit-ins seems like a logical and important place to start.

In Mexico, the corner belongs to those who work on it

The next wave of health care sit-ins begins today