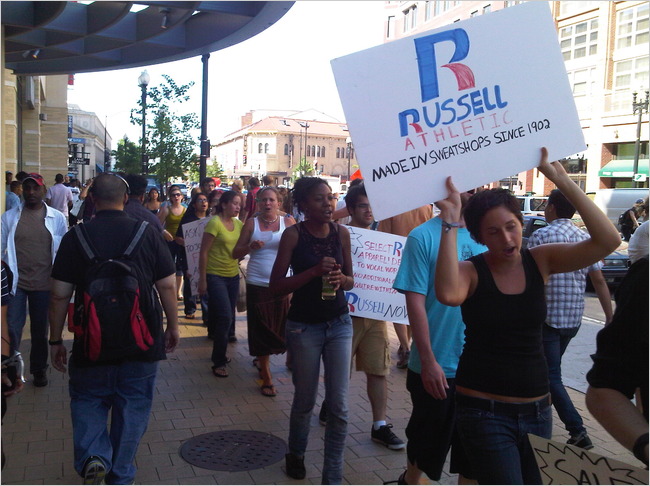 Earlier this month, I had an article on Yes! Magazine’s website, which was really just a longer version of a post for this site, about how many nonviolent movements that have successfully earned political rights and freedoms fail to address issues of poverty and economic inequality.

Writing that piece led me to reflect on what examples we do have of nonviolence seriously changing economic relationships. While I could think of a few important victories – like how the Bolivian people were able to kick Bechtel out of their country in 2000 after their water was privatized – I realized that we really should develop a list of these stories to complement the many examples of nonviolent movements bringing down dictators or repressive regimes over the last several decades that are well-known.

With that thought in mind, I was happy to find one great example that we can add to this collection on the front page of the New York Times last week.

The often raucous [anti-sweatshop] student movement announced on Tuesday that it had achieved its biggest victory by far. Its pressure tactics persuaded one of the nation’s leading sportswear companies, Russell Athletic, to agree to rehire 1,200 workers in Honduras who lost their jobs when Russell closed their factory soon after the workers had unionized.

From the time Russell shut the factory last January, the anti-sweatshop coalition orchestrated a nationwide campaign against the company. Most important, the coalition, United Students Against Sweatshops, persuaded the administrations of Boston College, Columbia, Harvard, New York University, Stanford, Michigan, North Carolina and 89 other colleges and universities to sever or suspend their licensing agreements with Russell. The agreements — some yielding more than $1 million in sales — allowed Russell to put university logos on T-shirts, sweatshirts and fleeces.

Going beyond their campuses, student activists picketed the N.B.A. finals in Orlando and Los Angeles this year to protest the league’s licensing agreement with Russell. They distributed fliers inside Sports Authority sporting goods stores and sent Twitter messages to customers of Dick’s Sporting Goods to urge them to boycott Russell products.

The students even sent activists to knock on Warren Buffett’s door in Omaha because his company, Berkshire Hathaway, owns Fruit of the Loom, Russell’s parent company.

The rest of the article is worth a read, so check it out. And please tell us about any stories of nonviolent movements winning tangible concessions from corporations or achieving a greater degree of economic justice that you know of in the comment section.