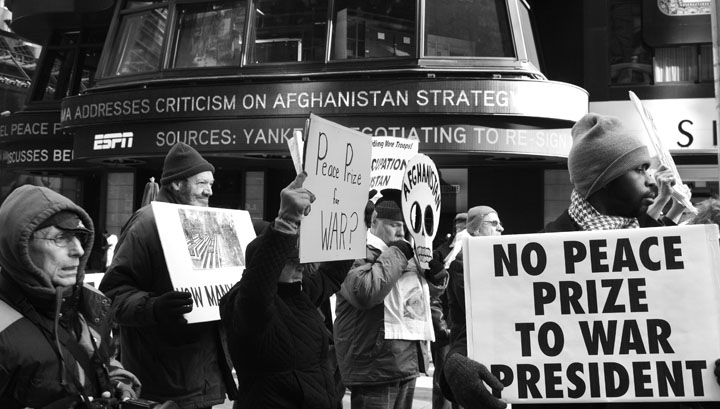 Over at Foreign Policy In Focus, I had an article yesterday in response to Obama’s dismissal of nonviolence during his acceptance speech for the Nobel Peace Prize. As often as the new peace laureate references the influence that Gandhi and King have had on his life, he was sure quick to write off any alternative to war in dealing with our most pressing problems.

So, I decided to tell a few stories of how nonviolence worked against the Nazis, and provide a few pieces of evidence that the threat of terrorism will only be exacerbated by sending more troops to Afghanistan. To check out the whole piece, click here.

The picture above was taken by Ed Hedemann, a good friend from the War Resisters League, at a protest that I took part in on the day Obama delivered his speech. We walked from the UN headquarters in New York to the military recruiting center at Times Square. I volunteered to carry a coffin –  made of cardboard and drapped in a black cloth – and wore a protest shroud bearing an image of a civilian killed in Afghanistan by a US bomb, which brought home the real human cost of the war in a way that I have never experienced by simply holding a sign.

Thankfully, there was a lot of media covering the demonstration. For whatever reason, the irony of Obama accepting the world’s most prestigious peace award on the heels of making the decision to escalate a bloody war was too hard for even the mainstream press to ignore.

For anyone who speaks German, the video of an interview I did with Reuters during the protest can be seen in an article on the website of Die Zeit, the largest weekly German newspaper. To watch that clip, click here.

A lesson on nonviolence for the President