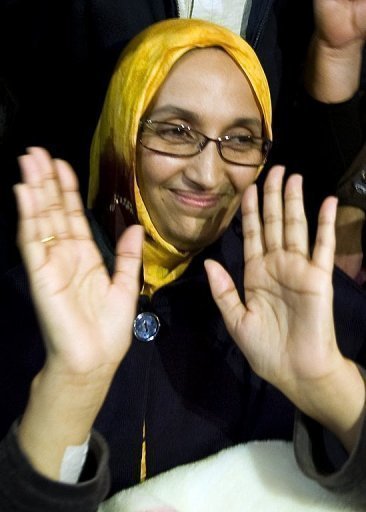 After being on hunger strike for 32 days and coming dangerously close to death, Aminatou Haidar, the activist who has been struggling for Western Sahara’s independence from Morocco, was finally allowed to return home on Friday.

“There were no conditions. My positions cannot be sold at auction,” Haidar told French television channel France 24 by telephone.

(To recap Haidar’s harrowing story: After landing in Western Sahara on her way home from a trip to the US last month, where she received a prestigious human rights award, the Moroccan authorities refused her entry, confiscated her passport and put her on the next flight to the Canary Islands,  saying that she could not return until she swore loyalty to the King of Morocco. Upon arriving at the airport, Haidar immediately began a hunger strike that drew increasing international attention as her health deteriorated.)

Morocco finally decided to let Haidar return home after the United Nations and several countries – including the US and France – intervened on her behalf. Her hunger strike will also likely give a boost to the independence movement in Western Sahara. According to allAfrica.com:

…United Nations Secretary-General Ban Ki-moon told reporters in New York [last week] that the situation arising from the hunger strike “really requires that the United Nations needs to do more on political negotiations” over the territory’s future.

Haidar’s ordeal provides a good case study of how nonviolent action can convert the opponent. As Thomas Weber, a leading Gandhian theorist from Australia, concluded after looking at the vast literature on the subject, self-suffering often leads to conversion indirectly “through the agencies of third parties” by moving public opinion or the opinion of those at a closer social distance “to the perpetrator of the suffering to the side of the sufferers.” I would argue that this pretty accurately describes how Haidar’s hunger strike worked.