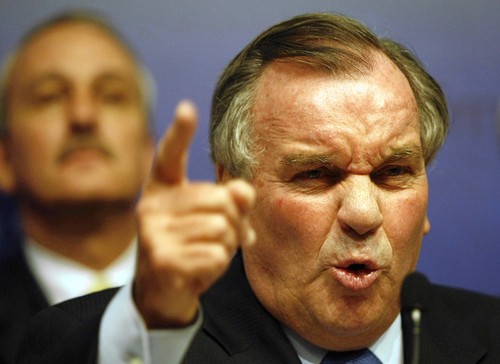 Chicago Mayor Richard M. Daley doesn’t feel that he needs to do a whole lot these days. Over the past week, as indignation and frustration has swelled with city truck drivers, Daley has refused to so much as meet with Teamster officials. Meanwhile, the union is threatening to strike, which would cause a massive stoppage in city services; the Daley administration has claimed that a strike would be illegal and won’t give an inch.

According to the Teamster contract, the city is obligated to employ a workforce and pay them when there isn’t any work. The trouble started at Chicago airports, where plow drivers are accustomed to getting paid even when there isn’t any snow, and thus no work. This cost-cutting measure would reportedly save the city $1 million annually.

The issue here isn’t about money. When looking at the overall financial picture of Chicago, $1 million is loose change. It’s the $20 debt your friend asks you to repay while your house is being foreclosed. The city’s finances are grim, and $1 million isn’t going to help it.

In 2009, Chicago reported a deficit of over $500 million. Not only that, but the payments for Daley’s $86 million loan to purchase the decrepit Michael Reese hospital (slated to be converted into an Olympic Village—so much for that) are about to kick in, and the billion that was brought in through the absurd parking-meter deal to cover the city’s massive shortfalls is already dried up.

But it’s easy for Daley to point fingers at these workers and get the public behind him. They are, after all, getting paid good money to not work, while so many are laid-off.  Daley can work his spin and divert the attention from what a strike would truly represent: an organized challenge to Daley’s limitless power.

Last week, Daley said that “these are very difficult times and we all have to share in that pain.” True, yet it’s hard to recognize what Daley is doing to alleviate this pain.

In the coming months, the Chicago Transit Authority will begin running fewer bus lines, a result of the city’s bus driver layoffs. Again, the city tried to pin the blame on the workers; CTA employees were asked to take salary cuts, and when they refused, the onus fell on the shoulder of union officials. Yet there was no mention of the systemic problem of an abundance of management positions the city has been doling out like candy over the years (as one union official pointed out, stations that had four managers 15 years ago now have over 20). These are positions generally reserved for city insiders, friends of friends, relatives and the like. People with clout.

Perhaps the most frightening thing about this rift with the city truck drivers is the door Daley may be holding, ready to open it when the time is right. If a strike does occur, Daley’s case for privatizing yet another city service would drop into his lap. Thus far there’s been no speculation, but Daley likes to handle these things like a jungle cat; Meigs Field was bulldozed (by private crews) in the middle of the night, and the parking meter deal was pushed through the city government before anyone knew what was happening.

At this pace, Chicago is a city without a future, and that will be Daley’s legacy.  As the city’s budget woes deepen and Daley continues to refuse to address the systematic failures of the city’s operations, the only choice will be to continue auctioning off whatever isn’t nailed down. After all, as Daley once said, “there’s only so much a government can do.”

Michael Moreci is a writer living in Chicago. His debut graphic novel, Quarantine, is forthcoming with Insomnia publications. His shorter comic work has appeared (or is forthcoming) in FutureQuake, Something Wicked, Accent UK’s Victoriana anthology, and Insomnia’s Layer Zero: Survival anthology. His freelance journalism has been published in the Huffington Post, Stop Smiling, North Shore magazine, In These Times, New City, and Earth Island Journal. Contact him at michael.moreci[at]gmail.com.

Meet the activist who brought the Monopoly Man meme to life