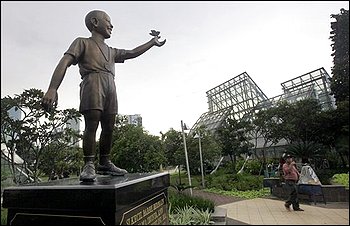 After a statue of a 10-year-old Obama was placed in a central park in Jakarta in December, Indonesians began to protest. More than 56,000 people joined an Indonesian-language Facebook group called “Take Down the Barack Obama Statue in Taman Menteng Park.”

The resistance to the statue was apparently not so much because of what Obama has or hasn’t done as president, but because they questioned his real contribution to Indonesian society.

“Why should Obama’s statue be displayed in the center of Jakarta?” Linda Christanty, one of Indonesia’s most well-known writers, told Andre Vltchek in an article on Foreign Policy in Focus today. “Why didn’t they erect statues of the reformation heroes — people who were kidnapped during the Suharto era? Such statues would serve as a warning. It could help to prevent some terrible crimes from happening again — crimes like the forced disappearance of the people.”

Due to the mounting protest, Jakarta’s City Park and Cemetery Agency actually took the statue down on Sunday. City officials confirmed that it will be moved to the grade school that Obama attended from 1967 to 1971, which is in the area.

While this protest is fine, I’m a bit surprised that the folks behind the push to take the statue down didn’t express a wider range of grievances. For one thing, I don’t know of any major shift in US policy towards Indonesia, which has really been hideous for decades. And I would think that many in Indonesia – which is a predominately Muslim country – might be offended by the fact that Obama has significantly escalated the wars against Afghanistan and Pakistan and has not altered US support for undemocratic, repressive regimes in the Muslim world in any meaningful way. But I guess those are just a couple of my own gripes with our dear leader.