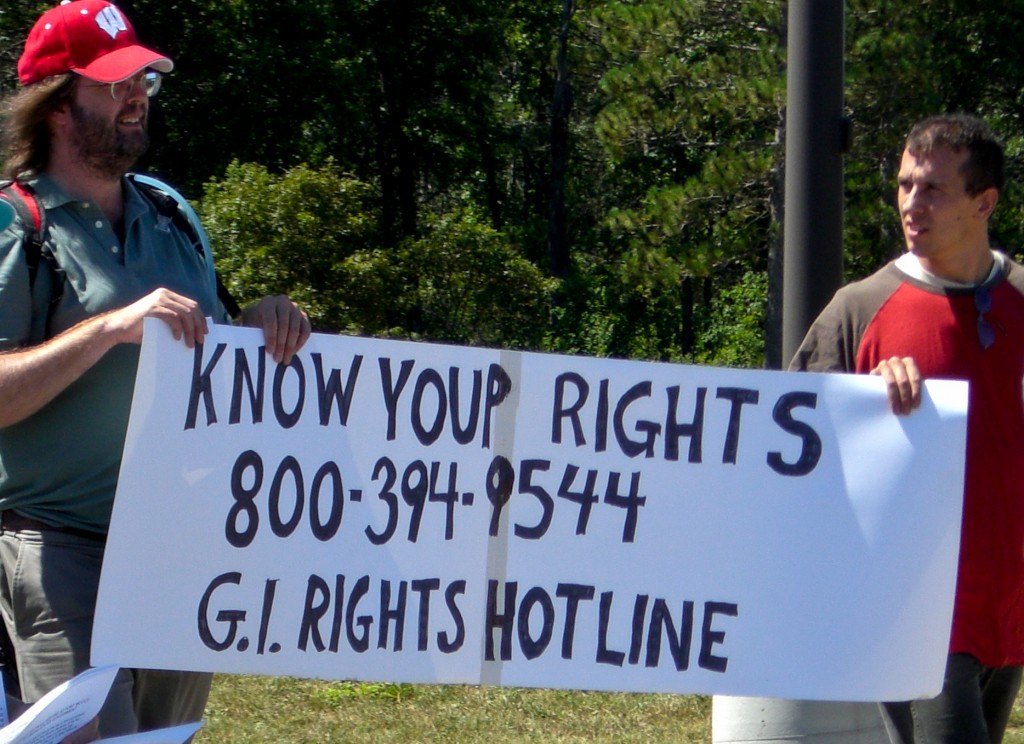 On entering the Dane County Jail, the first holding cell that Brian Terrell and I were placed in had only one other person. We previously saw this man outside the cell during our initial booking. He was a man with dark black skin and a full beard. I thought I heard one of the officers say he was from Gambia. When we entered the cell, the man was in mid-ritual in what appeared to be a Muslim’s midday prayer. A young white guard, who had the accent of a Midwesterner, looked disdainfully at the man and then somewhat positively at Brian and me. The guard said, “Just ignore that,” as if the man was insulting or threatening us by his peaceful act of prayer. To which I replied, “It’s fine with me.”

This experience was contrasted by the next encounter I had with another officer who made digital copies of my fingerprints and pictures. As this middle-aged man placed my hand on the machine, I made a remark that I was surprised that he did not already have my information handy. (This was the third time I was fingerprinted and pictured for this same charge.) He said, “Oh yeah? You arrested a lot? What are you in for?” I told him that I was arrested with a group who engaged in civil disobedience at Ft. McCoy. Getting the sense that this man may have previously been in the armed services, I explained that we were not against the men and women in the military personally, but that our goals were to enter the base to talk to the rank and file soldiers about ending the wars in Iraq and Afghanistan and to make certain the soldiers were aware of their right to refuse illegal and immoral orders.

Before I could get all of this out of my mouth, the officer piped in abruptly and surprisingly, “I understand folks like you. I was in Vietnam, and this is the same shit happening today.” I said, “Oh yeah? What did they have you doing over there?” He replied, “Killing people and breaking shit, and this is just the same.” He gazed at me with a fierce intensity and honesty. I was now a bit nervous, feeling that I had asked too much too quickly. After a moment I said, “I’m sorry sir. I’m sorry they had you do that.” I continued, “Well, from my perspective, I don’t want any more young men and women to have to do what you did, nor to put themselves in harm’s way for a war that has no goals or objectives…” He cut me off. I was planning to finish my sentence with something like “…no goals other than bringing more profits to corporations and expanding the U.S. empire.” But he continued in an angry tone, “There was no goal then and there is no goal now. It’s all pointless.” I nodded my head in agreement.

A few more words were exchanged between us about the families being torn apart in the U.S., Iraq and Afghanistan. The disgruntled Vietnam Veteran, now turned law-enforcement officer, concluded taking my fingerprints. He then told me his name and again repeated something to the tune of “I can respect people like you.” After the unexpected bond of our short conversation, the feeling was mutual. Ironically, this same man sent me along the way to serve my jail sentence for speaking out against the crimes being committed by our government and soldiers in Iraq and Afghanistan, which have now expanded to illegal drone strikes and extra-judicial killings in Pakistan and Yemen.

Until we build a culture that widely accepts that it is okay and necessary to resist war and injustice, I suppose that’s the way it will go. I don’t know when or if the day will come, but I look forward to the day of the “coming revolt of the guards” that our late brother Howard Zinn predicted; a day when veterans, soldiers, policemen and judges can stand together with civilians, workers and activists alike to put and end to any further senseless tragedies and atrocities.

Joshua Brollier is a Co-Coordinator with Voices for Creative Non-Violence in Chicago. He and Brian Terrell were released earlier this week from Dane Co. Jail in Madison, WI, after serving a 14 day sentence for non-payment of a fine which was imposed on them for trespassing at Ft. McCoy in the summer of 2008.

“The Coming Revolt of the Guards”