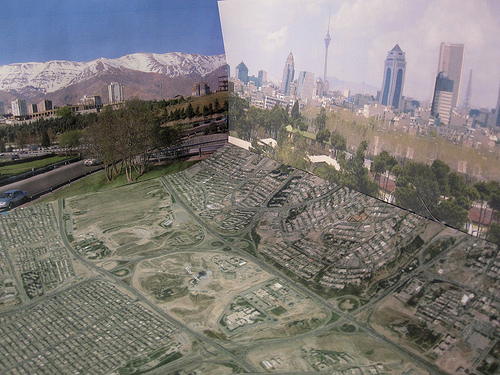 On Tehran Bureau, an interesting new blog on PBS’s website about Iran, an Iranian friend of ours –  writing under a pen name – published an important article last week with some sound strategic advice on nonviolence for the Green Movement.

The goal is to erode the pillars of support for the regime until loyalties shift, practical power begins to drain away, and the regime starts crumbling from within. Civil disobedience is thus not primarily aimed at demonstrating the moral superiority of the opposition movement — though that is admittedly one objective — but rather to disrupt the “normal” flow of commerce, politics, and everyday life. Clearly, a violent struggle against a much stronger foe has little chance of disrupting “normal” conditions except for fleeting moments, since violence gives the state license to stamp out its opponents with the full range of instruments at its disposal.

Moreover, violence he argues would only cede the religious “center,” which includes most clergy and millions of everyday citizens, to the hardliners. He then enumerates several critical strategic principles, including:

2. Co-optation: One of the most important goals must always be to co-opt elements of the regime’s forces to the movement’s side. We will NOT win unless this happens. The strategy of co-optation requires maximum attentiveness to the nature of our message and the language we employ. Any gestures that reduce the ability of those not currently part of the movement to shift their loyalties must be avoided. For example, “death to the Islamic Republic” chants, openly atheistic acts, and threats of violence are all deeply counterproductive.

3. Neutralization: Clearly, not all, and perhaps not even most, of the regime’s supporters can be won over. But that doesn’t mean they should all be counted as perennial enemies. We must convince some of them that this regime has no future, that they are much better off by disassociating themselves from it, and that they may continue to work and live as normal citizens as long as they do not try to dominate the rest of society again.

4. Persistence: Civil disobedience is a drawn-out process. The movement should prepare for the long haul and not expect the regime’s sudden, precipitous collapse. Of course, if such an event did occur, we would all be very happy, but we cannot build our strategy on such a model. To do so would be to court disaster. We should prepare for a drawn-out fight. Whichever side — the Green Movement or the regime — designs a strategy better adapted to a prolonged struggle will win in the end. The wave of demoralization that followed the events of February 11 would not have occurred had there been a more sober assessment of the situation and a clearer understanding of the nature of the struggle.

With regards to this final point, I’ve made a similar argument on this blog with regards to the antiwar movement here in the US, and how deflated many felt after the massive protests on February 15, 2003, failed to stop the invasion of Iraq.

The rest of this strategic think piece is worth a read, so check it out if you have the time.

Hurray, I am pregnant! Oh wait, what about the planet?

A winning strategy for Iran