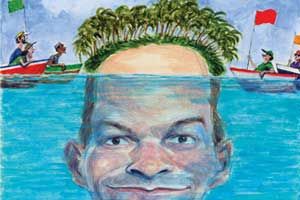 Want to learn the tools of nonviolent action from the leaders of a movement that actually brought down a brutal dictator, and earn a real academic degree in the process?

That is exactly what Srdja Popovic hopes to offer at “Democracy Island,” a campus in the Maldive Islands “where activists can study nonviolent resistance amid coconut trees, white sand, and lagoons the color of Cool Mint Listerine,” according to a great profile of him by Nicholas Schmidle in the March-April issue of Mother Jones.

For those that aren’t familiar with Popovic, he was one of the leaders of Otpor (“Resistance”), the nonviolent movement that forced Slobodan Milosevic from power in Serbia in 2000.

After that incredible victory, Popovic served as an member of Serbia’s parliament and in 2004 co-founded the Centre for Applied Nonviolent Action and Strategies (CANVAS) in Belgrade to “give pro-democracy activists the nitty-gritty tools for nudging intransigent leaders and, if necessary, toppling governments without firing a shot.” Since its start, CANVAS has been busy, training activists in:

…Georgia, Ukraine, and Lebanon who went on to lead the Rose, Orange, and Cedar revolutions, respectively. CANVAS staff has also worked with activists from Azerbaijan, Palestine, Egypt, Western Sahara, Zimbabwe, and Burma.

Now Popovic has his sights set on starting Democracy Island, which grew out of his:

…recent success in the Maldives, where, in 2008, a former political prisoner named Mohamed Nasheed defeated the country’s longtime strongman in a multiparty election held after three years of nonviolent agitation. CANVAS had worked closely with Nasheed’s Maldivian Democratic Party, and in gratitude, the 42-year-old president has agreed to help it and a handful of environmental and human rights NGOs establish a campus in the archipelago.

Besides attracting rabble-rousers, Popovic wants Democracy Island to be a legitimate academic institution where Maldivian and foreign scholars, activists, and politicians can get a master’s degree in nonviolent political change.

While the article says that this school of nonviolence could get off the ground this spring, if everything goes according to plan, a quick google search doesn’t turn up much about the project. So, if you’re itching to get on that first roster, it unfortunately doesn’t appear to be up and running quite yet. (We’ll try to get more details on how things are developing and report back soon.)

My only concern is with the long-term viability of anything in the Maldives, which are already sinking, and could be completely submerged by the end of the century, due to rising ocean levels caused by climate change.

Interestingly, Schmidle also asks Popovic about those on the fringe who accuse his organization and other proponents of nonviolent action, like Gene Sharp and the International Center for Nonviolent Conflict, of working in cahoots with the US government to help overthrow regimes it dislikes.

…Popovic says such claims are baseless. Not only would American support jeopardize CANVAS’s nonpartisan stance, but for him, it’s personal: In 1999, NATO warplanes bombed the Belgrade offices of Serbian state TV, where his mother was an editor. She wasn’t there that evening, but 16 of her coworkers were killed. “Do you think I would ever collaborate with the government that tried to kill my mom?” he once asked.

February 21, 2013
Sally Bunner and Will Lawrence

Despite crackdown, teachers in Zimbabwe keep pressure on a regime in transition