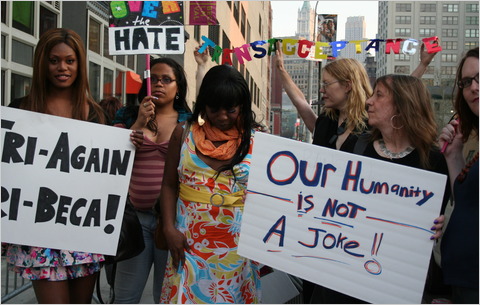 Members of the trans community and allies protested in front of the Tribeca Cinemas in New York City last week.  The rally was in response to the Tribeca Film Festival’s premiering of “Ticked-off Trannies with Knives,” a transphobic film that highlights rape and violence.

The New York Times quoted an organizer’s explanation for the protest:

“The transsexual and transgender communities are all too often the victims of violence, marginalization and discrimination as a result of inaccurate media depictions like this film, which is offensive, dehumanizing and misogynistic and causes further misunderstanding and harm to an already dangerously oppressed minority group,” said Ashley Love, a Magnet organizer.

Protesters said both the derogatory language in the title as well as stark images of violence in the film lead to increased misunderstandings and violence against transpeople.

“People are telling us to lighten up,” Ms. Love added, “but I heard reports of two more trans women murdered this morning. It’s not a laughing matter. We’re not laughing at all.”

Not only do trans folks experience violence at shockingly high rates, they have problems accessing employment, medical care, and basic services such as public restrooms.

The Tribeca Film Festival declined to remove the film or change the title.  The movie description itself acknowledges the statistics–it was “inspired by the devastating increase in brutal hate crimes against the transgender community”–but its incarnation is seen as exploitative and encouraging of violence rather than explorative.

A candlelight vigil was also held, and as one activist put it:

This time we’re going to make ourselves heard. Because we’re tired of our dead being marginalized, overlooked, and even used as advertising material for a cheap gimmick of a film.

Meg Pedersen graduated from Barnard College and is currently based in Washington, DC. She has lived in Denmark and Chile and focuses her work on writing and feminist advocacy.

Winning with each other