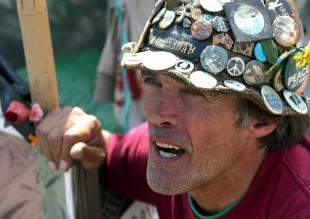 For the last nine years, Brian Haw – an evangelical father of seven – has camped outside of the Parliament in London to protest his country’s foreign policy, particularly the ongoing wars in Iraq and Afghanistan. According to an interesting profile in In These Times, Haw has persevered through many difficulties:

Haw has been the target of many attempts to suppress a critical voice. Council chiefs, the police and the government have all tried and failed to evict him from this prime piece of real estate. His placards have been confiscated. He has been arrested several times. He has suffered a number of assaults and broken bones. Parliament even passed a specific piece of legislation aimed at ridding Parliament Square of his presence.

Haw has fought and eventually won every attempt to have him removed, though his encampment was once much larger than it is now. In 2006 police raided the site and confiscated most of its contents. They also imposed a limit on its size: 3 meters by 3 meters.

In addition, Haw has apparently managed to generate significant media coverage and debate, even earning the admiration of many in the UK, through his dedication and personal sacrifice.

The media have described Haw as irascible, irritable, embittered and angry. Some he has worked with consider him self-righteous, pedantic and a control freak who suffers from a bit of a God complex. But many hail him as a peace-loving hero and a champion of free-speech.

In 2007 he won Channel 4’s most inspiring political figure of the year — beating out the prime minister, the leader of the opposition party and the head of the army. And, while his Parliament Square protest site has been called a “grotty eyesore”, a “squalid encampment” and a “national embarrassment” by members of Parliament, it was faithfully recreated in a show titled “State Britain” inside the Tate Britain Museum and resulted in the artist Mark Wallinger winning the prestigious Turner Prize in 2007.

Haw’s protest reminds me of Concepcion Picciotto, a Spanish women I met last year, who has camped outside of the White House since 1981 to protest nuclear weapons. Anyone know of any other long-term protest encampments worth mentioning?

One year later, Ayotzinapa’s 43 missing normalistas are not forgotten