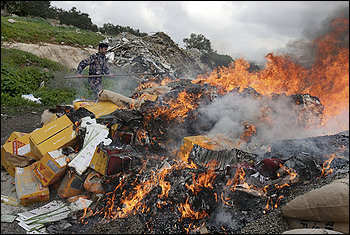 On Sunday, the Washington Post ran a story on the  growing boycott by Palestinians of products that come from Israeli settlements, which not surprisingly included quotes from an unnamed “Western diplomat,” an Israeli official and a Palestinian grocer who question the motives and effectiveness of the tactic. Nevertheless, the boycott is clearly beginning to take a toll:

In Mishor Adumim, a bougainvillea-lined industrial zone inside this West Bank Jewish settlement, at least 17 businesses have closed since Palestinians began boycotting its products several months ago.

For the Israelis, it’s “an insufferable situation,” according to Avi Elkayam, who represents the settlement’s 300 factory owners. But for Palestinians, it might be the strategy they have been looking for.

“We are definitely committed to a path of nonviolent resistance and defiance in the face of the settlement enterprise, and we are defiantly expressing our right to boycott those products and I believe it is working,” Palestinian Prime Minister Salam Fayyad, who has attended bonfires of settlement products, said in an interview last week. “We will continue to do more.”

In addition to forcing factories to close or relocate to Israel proper, the boycott is also deterring other Israeli businesses from moving to the settlements.

Interestingly, the Palestinian Authority is getting involved by enforcing a ban on selling settlement products. So far, more than $5 million worth of settlement goods have been confiscated and destroyed.

Disarming bullies — from schoolyards to the White House

Settlement boycott by Palestinians having an effect