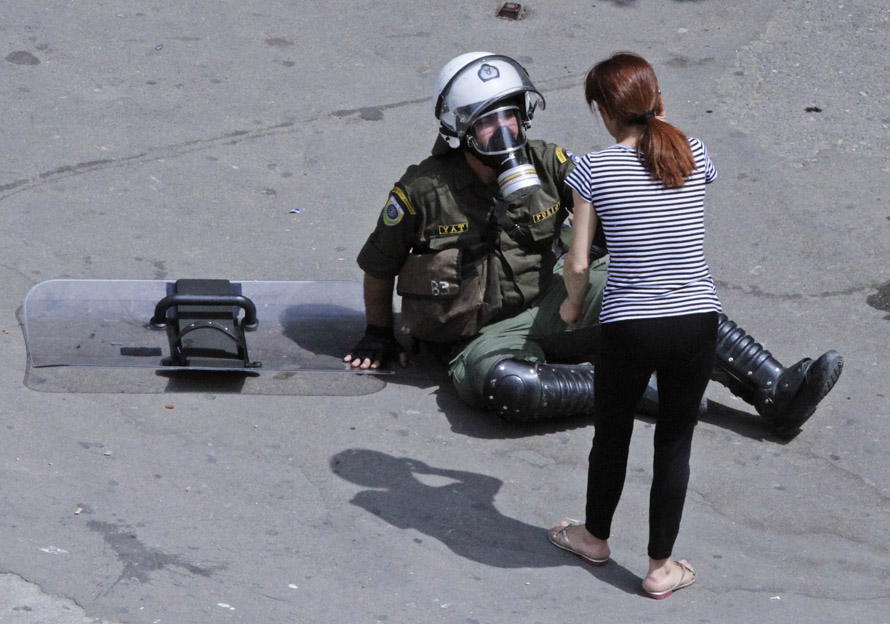 The news coming out of Greece today has been less focused on Parliament’s passage of tough austerity measures and more on the violent actions of a small group of protesters. As The New York Times explained:

The demonstration had drawn tens of thousands of people near the central square in front of Parliament as part of a general strike that paralyzed flights, ferries, schools and hospitals. It did not initially appear different from many other, mostly peaceful protests in recent months, as the country’s financial crisis has deepened and the likelihood of painful sacrifices has grown into a certainty.

However, clustered among the protesters were subgroups numbering in the hundreds — mostly young and many clad in black, wearing hoods or masks and carrying helmets, wooden bats or hammers — that the police and other demonstrators identified broadly as anarchists.

They led efforts to storm the Parliament building, chanting “thieves, thieves,” and hurling rocks and gasoline bombs. Some chased the ceremonial guards away from the Tomb of the Unknown Soldier in front of the building. The police responded with tear gas canisters that spread a choking pall over the crowd.

Perhaps that story line would sound familiar to those who’ve followed recent G20 protests or even the Copenhagen protests, where largely nonviolent actions were overshadowed by the violent work of a few black-bloc anarchists. Unfortunately, things got even worse in Greece:

In mid-afternoon, in a nearby neighborhood, a firebomb was flung into the Marfin Egnatia Bank, trapping at least 20 people. Firefighters worked to evacuate them, but the police said a man and two women stuck on the bank’s second floor died from smoke inhalation. Colleagues sobbed in the street.

These mark the first deaths during a protest in Greece since 1991 and have, as The Times put it, “shocked many in Greece, where demonstrations have been a way of life for decades and played a pivotal role in the overthrow of the military regime in 1974.”

But amidst this turmoil it’s important to remember that the demonstrations appear to have otherwise been nonviolent. The photo above shows a young protester helping a police officer back to his feet after having slipped. And other photos (not including the masked anarchists) have shown reasonable average people taking to the streets in a peaceful way.

Unfortunately, it now seems likely that the tragic deaths following this violent outburst will be used by the government to further exploit their position and push through what appears to be deeply unpopular legislation.

Unveiling the prophets of profit in St. Louis