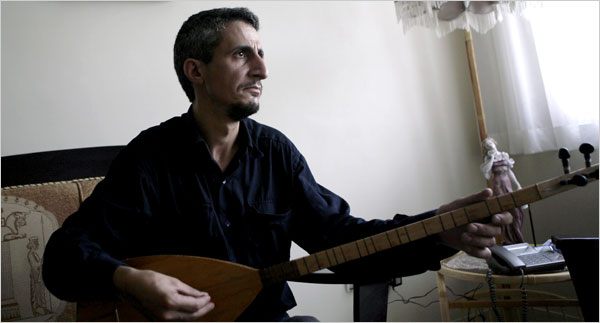 The New York Times ran an interesting piece about the power of protest music in Iran earlier this week, saying:

Since the Iranian authorities have cracked down on the demonstrations that rocked the country after a disputed election a year ago, a flood of protest music has rushed in to comfort and inspire the opposition. If anything, as the street protests have been silenced, the music has grown louder and angrier.

The authorities have also tried their hardest to crack down on the spread of this music, shutting down sites where music can be downloaded and arresting musicians, but, as the Times puts it, “clamping down on music in the digital age is like squeezing a wet sponge.”

Protest songs are downloaded on the Internet, sold in the black market or shared via Bluetooth, a wireless technology that Iranians have adapted to share files on cellphones, bypassing the Internet altogether. Fans have also made dozens of homemade videos, setting montages of protest images to music and posting them online.

Since there are no functioning music charts in Iran, it’s hard to know how huge this phenomenon has become, but according to the Times:

An opposition Web site has posted about 100 protest songs recorded since the election. About two dozen of them honor Neda Agha-Soltan, the 26-year-old teacher shot at a protest in Tehran in June who became an icon of the opposition after her last moments were captured on a video that has since been widely circulated.

Two of the leading voices are folk singer Mohsen Namjoo (pictured above) and rapper Shahin Najafi. Although both are in exile, the former in California and the ladder in Germany, they’ve managed to connect strongly with different segments of the Iranian population.

If Mohsen Namjoo, the folk troubadour whose poetic lyrics and tuneful melodies appeal to older listeners, is, as he has been called, the Persian Bob Dylan, Mr. Najafi may be the Rage Against the Islamic Revolutionary Machine, whose harsh lyrics and hip-hop beats have captivated Iranian youth.

The implication is that for right now this might be the strongest form of protest Iranians have to offer.

Street vendors in Tehran sell bootleg CDs and MP3s at traffic lights for $2 or $3. Protest music plays on stereos at parties and from cars on the streets, Tehran residents say. Music blasting from car speakers at a stoplight has become one of the more public ways still available to signal to others that the spirit of struggle still lives.

And it will continue to live as long as the demands of the Green Movement remain outstanding.

Disarming bullies — from schoolyards to the White House