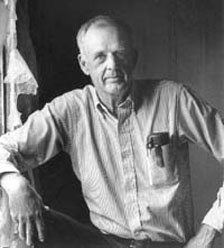 Renowned Kentucky farmer, poet, essayist, and environmental writer Wendell Berry is pulling many of his personal papers from the University of Kentucky’s archives to protest the naming of a new campus building. According to the Lexington Herald-Leader:

Berry excoriated his alma matter in a Dec. 20, 2009, letter, saying the decision to name a new dorm for UK basketball players the Wildcat Coal Lodge “puts an end” to his association with the university.

“The University’s president and board have solemnized an alliance with the coal industry, in return for a large monetary ‘gift,’ granting to the benefactors, in effect, a co-sponsorship of the University’s basketball team,” Berry wrote in the typewritten letter. “That — added to the ‘Top 20’ project and the president’s exclusive ‘focus’ on science, technology, engineering, and mathematics — puts an end to my willingness to be associated in any way officially with the University.”

Berry is among the most revered writers in Kentucky history and his statement is no doubt a blow to the university, but they’ve dealt with his wrath before:

In an essay published in 1987, The Loss of the University, Berry argued for a college education that would broaden a student’s exposure to a number of disciplines rather than produce the narrow skills of career-minded transients with no sense of a homeland.

At a 2007 commencement address at Bellarmine University, Berry railed against “the great and the would-be-great ‘research universities.’ These gigantic institutions, increasingly formed upon the ‘industrial model,’ no longer make even the pretense of preparing their students for responsible membership in a family, a community, or a polity. … The American civilization so ardently promoted by these institutions is to be a civilization entirely determined by technology, and not encumbered by any thought of what is good or worthy or neighborly or humane.”

While it’s unclear whether Berry’s latest action will have any kind of effect, it is no doubt consistent with his beliefs and will probably have more of an effect in the years to come, lending evermore creadence to his strong sense of respect for humans and nature.

Parents of the United States, unite!

How can we reclaim the holiday season from corporations?