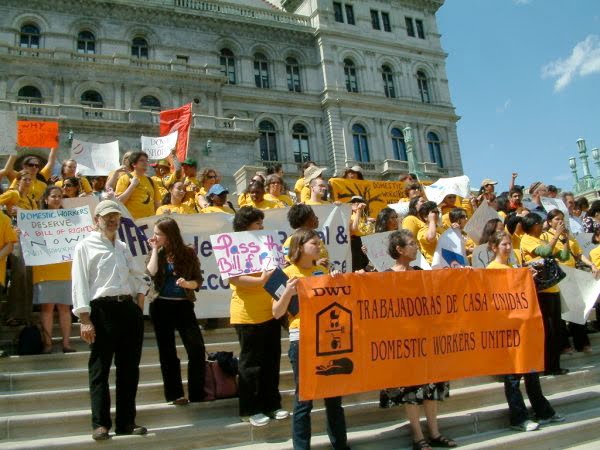 After a decade long nonviolent campaign to improve their pay and working conditions, domestic workers in New York celebrated the signing of the Domestic Workers Bill of Rights by Governor David Paterson earlier this month. As Bill Fletcher Jr. writes:

The gist of the legislation is more than impressive. It establishes an eight hour legal work day; over time at time and a half after 40 hours for live-out domestic workers and 44 hours for live-in domestic workers; one day of rest in each calendar week; overtime pay on that day of rest if the worker chooses to work; after one year of employment three paid days off; workplace protection against discrimination, sexual harassment, and other forms of harassment; workers compensation; and the completion of a study by November 2010 of the feasibility of establishing organizing for collective bargaining.

This struggle is noteworthy on many levels, not the least of which being the building of a new relationship with organized labor. After the passage of the National Labor Relations Act, “excluded workers,” including but not limited to domestic workers, were largely abandoned by the formal union movement. While there has been a history of efforts to organize such workers into unions or union-like structures, with the exception of struggles such as the one led by the California-based United Farm Workers union, these have largely been off of the radar screen of most of the union movement. In some cases, such snubbing was the result of racism and sexism, while in other cases it was simply a sort of legalese narrowness, i.e., the law excludes these workers so they are out of luck.

The campaign in New York started to turn some of this around. Domestic Workers United, along with its national umbrella, are part of a newly emerging movement of organizations and centers that have emerged outside of the framework of organized labor but are seeking a new and respectful partnership with the unions. DWU and its allies in New York sought out labor union support. The New York City Central Labor Council embraced their efforts, but so too did both the Service Employees International Union Local 32B/32J (the mega building service local stretching from Massachusetts to Washington, DC) and the New York City-based Transport Workers Union, Local 100. The national AFL-CIO, representing more than ten million workers, also joined forces. Then AFL-CIO President John Sweeney offered his personal stamp of support for the efforts aimed at securing a domestic workers bill of rights.

While this should no doubt be seen as a step forward, as Fletcher notes, the struggle for true equality and economic justice for these historically exploited workers continues:

Concerns have been raised in some arenas that this victory has not gone far enough and there is certainly some truth to that.  There are decades of repair work that need to be done to make amends for the mistreatment and marginalization experienced by this workforce.  At a minimum a system of collective bargaining needs to be put into place whereby the state or cities take responsibility for ensuring that resources are made available to raise the living standard of these workers.  To expect total or near total victory at this stage, however, would be entirely unrealistic.  Much like newly organized workers in the 1930s, the first victories institutionalized their existence and granted them the raw elements of economic justice.  It took years of organization-building and struggle to advance based upon those early victories.