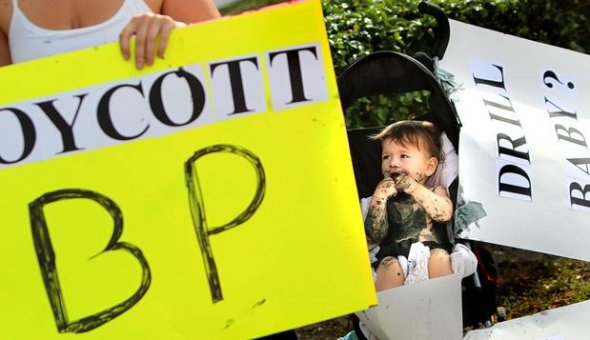 From day one of the BP oil spill back in April, locals in southeast Florida feared that a carefree day at the beach might soon be a distant memory, a devastating prospect for a region whose primary industries consist of tourism and retirement. In mid May, satellite images showed oil starting to enter the Gulf Loop, a current that pulls water through the Florida Keys, into the Gulf Stream and up to Palm Beach County. Haunted by the specter of the Gulf Stream bringing spilled oil to the shores of southeast Florida, several organizations here mounted nonviolent responses to the largest oil disaster in U.S. history. With the renegade pipeline in the Gulf apparently capped, this is a good time for a post-mortem wrap-up.

The Palm Beach County Environmental Coalition was the first responder, calling for a boycott kickoff at a local BP station on a Wednesday evening. The roughly 30 demonstrators on the scene drew mostly positive responses from rush-hour drivers, but the station had customers throughout the 90-minute demonstration. Media coverage of the event, however, was extensive and may have had a greater impact than was at first apparent. A month after the boycott kickoff, a story about local BP station owners being unfairly hurt by the boycott appeared on the front page of the Palm Beach Post, persuading a lot of folks to abandon the boycott.

Three weeks after the boycott kickoff, A World Oceans Day meeting called by a local Greenpeace member attracted a diverse crowd of about 40. Housewives, teenagers, teachers, business owners, and retirees all seemed eager—desperate even—to act, but no unified action was suggested and none materialized. Instead, people were given a list of things they could do on their own, e.g., volunteer for the clean-up effort, sign a petition, make a donation, join a mailing list, etc. People left that meeting as isolated in their efforts as they had been before. In retrospect, World Oceans Day may have failed because it didn’t propose a mass action that directly challenged one or more of the groups responsible for the spill, namely BP, the federal government, and consumers themselves.

Hands Across the Sand – June 26

Finally, Hands Across the Sand, an organization based in northern Florida and formed at least five months prior to the spill, was planning a statewide action. People were directed by the organization’s website to arrive at the beach on Saturday, June 26 at 11:00 a.m. and to join hands, starting at 12:00 p.m., for 15 minutes. The message was simple: draw a line in the sand to say “No to offshore drilling” and “Yes to clean energy,” with the goal of impelling the Florida legislature to institute a ban on offshore drilling. The Hands Across the Sand event that I attended in Delray Beach drew roughly 150 participants of all ages, but with 800 such events around the country, Hands Across the Sand turned out thousands of bodies.

The high tide of optimism following the mass demonstration quickly yielded to fear again a week later, however, when the Sun-Sentinel reported on July 2 that “The chance of oil from the Gulf blowout reaching the waters off Fort Lauderdale, Palm Beach and Miami is 61 to 80 percent, according to new projections released Friday by the National Oceanic and Atmospheric Administration.” The oil never did arrive, but in late July, Florida Governor Charlie Crist, a candidate for the U.S. Senate, called a special legislative session, ostensibly to enact a ban on offshore drilling. The Florida legislature, however, was not on board, calling an end to the session after just 30 minutes, and going back home.

In terms of participation, Hands Across the Sand was clearly the most successful of these responses, which should not be surprising. After all, holding hands on the beach was convenient, easy, non-confrontational, and very temporary, lasting merely 15 minutes. As the great community organizer Saul Alinsky would be quick to point out, the action was within the experience of the people being asked to perform it.

The boycott, however, likely had a greater impact on its intended targets. In mid-June, some BP stations were “reporting as much as a 20 percent decline in sales” according to John Kleine, executive director of the BP Amoco Marketers Association representing station owners, with “more of an effect in some places than others, like Florida.”

So, while the special session did not produce a ban on offshore drilling and the boycott was countered, these nonviolent responses had a positive outcome on balance. Thousands of people participated in actions to punish a multi-national corporation and to persuade the Florida legislature to respond to the disaster, something I suspect has not happened in these parts ever before. The challenge now is to organize those thousands of people into a more effective force for reform. Let’s hope it doesn’t take another oil spill to get their attention on trying to protect their corner of the world. Given human nature, however, oil may need to wash up on our shores before people in Palm Beach County embrace nonviolence and understand the message of the BP oil spill—use less oil.

Pablo del Real is an activist, teacher, and author of a book of poetry and a political pamphlet. He is the founder of Auroras Voice.