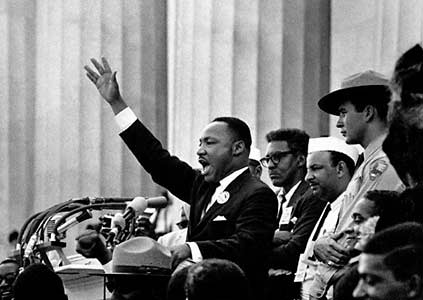 On August 28, conservative radio/television host Glenn Beck, 2012 Republican presidential candidate Sarah Palin, the National Rifle Association, and the Special Operations Warrior Foundation will conduct the “Restoring Honor” rally at the Lincoln Memorial in Washington, D.C. The date and location are significant. It was on August 28, 1963, on the steps of the memorial that Martin Luther King, Jr. delivered his famous “I Have a Dream” speech during the March on Washington. Beck has billed the rally as a “non-political event” that will pay tribute to America’s service personnel and “help us restore the values that founded this great nation.”

Although unaware of the date’s significance at first, Beck has since claimed its selection as “divine providence.” He has further justified the planning of his event by saying, “Whites don’t own Abraham Lincoln. Blacks don’t own Martin Luther King … Too many have forgotten Abraham Lincoln’s ideas and far too many have either gotten just lazy or they have purposely distorted Martin Luther King’s ideas.”

The March on Washington and King’s life work, of course, were dedicated to the pursuit of social and economic justice. In his famous “I Have a Dream” speech, King stated that marchers had come to Washington “to dramatize a shameful condition. In a sense, we’ve come to our nation’s capital to cash a check. When the architects of our republic wrote the magnificent words of the Constitution and the Declaration of Independence, they were signing a promissory note to which every American was to fall heir. This note was a promise that all men, yes, black men as well as white men, would be guaranteed the unalienable rights of ‘Life, Liberty and the pursuit of Happiness’ … So we’ve come to cash this check, a check that will give us upon demand the riches of freedom and the security of justice.”

Social activists and civil rights leaders, concerned that the “Restoring Honor” rally will co-opt the historical significance of the March on Washington to advance a political message that is directly at odds with the vision of King, have planned their own event on the same day. The National Action Network, the National Urban League, the Center for Nonviolent Social Change, the Leadership Conference on Civil Rights, United for Peace and Justice, and others are sponsoring the “Reclaim the Dream” rally and march. The rally will take place on August 28 at Dunbar High School (1301 New Jersey Avenue NW—Mount Vernon Square/7th Street/Convention Center Metro Stop on Green/Yellow Line) in the District of Columbia from 11:00 AM – 1:00 PM. At 1:00 PM, participants will march from Dunbar High School to the site of the King Memorial on the National Mall. All Americans are welcome and encouraged to participate in these events.

Rev. Al Sharpton of the National Action Network insists that the “Reclaim the Dream” event “is not a countermarch to Beck” and that he has every right to carry out his event. National Urban League president Marc Morial agreed, saying, “It is very important to convey a positive message that America belongs to everyone. Our rally is not an ‘us against them.’  We want no confrontation with Glenn Beck. But we want a confrontation with the ideas he espouses. His ideas seem to be ideas of intolerance.”

Participants are viewing the “Reclaim the Dream” rally and march as a warm-up to an October 2 event being planned by the NAACP and 200 other organizations. The “One Nation” march will take place in the nation’s capital and seek to “pull America back together and put America back to work.” According to NAACP President Benjamin Jealous, the event will “reflect Dr. King’s true legacy and his determination to eliminate poverty, racism and hatred in all forms.”

Just months before he was shot and assassinated in April 1968, King launched the “Poor People’s Campaign,” saying, “What we now [need is] a new kind of Selma or Birmingham to dramatize the economic plight of the Negro, and compel the government to act.” The campaign focused on jobs, income and housing and called for an “economic bill of rights” from the U.S. Congress—a request that was never answered. Decades later, King’s dream that “one day this nation will rise up and live out the true meaning of its creed—‘We hold these truths to be self-evident, that all men are created equal’” continues to inspire Americans nationwide. If you seek peace, if you believe in nonviolence, if you embrace the goal of social justice, please come out and join us on August 28 as we rally and march to Reclaim the Dream of one of America’s greatest leaders and proponents of full democracy.

Why I went to Guantánamo, again