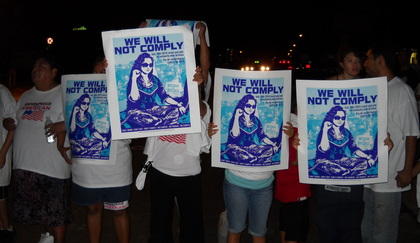 The history of nonviolent social change is filled with injunctions to refuse compliance with unjust laws and policies. As Gandhi once famously said, “non-cooperation with evil is as much a duty as is cooperation with good.” Reflecting on the Montgomery bus boycott, Martin Luther King, Jr. observed that “what we were really doing was withdrawing our cooperation from an evil system. … We were simply saying to the white community: We can no longer lend our cooperation to an evil system. From that moment on I conceived of our movement as an act of massive non-cooperation.” In Civil Disobedience, Henry David Thoreau mapped out the terrain in ways that would later influence both Gandhi and King:

Must the citizen ever for a moment, or in the least degree, resign his conscience to the legislator? … It is not desirable to cultivate a respect for the law, so much as for the right. … Law never made men a whit more just; and, by means of their respect for it, even the well-disposed are daily made the agents of injustice.

These teachings were alive and well during the demonstrations in Arizona against SB 1070, the state’s anti-immigrant law that was partially struck down by a federal judge two days before it took effect. In recognition of the larger issues raised by the bill, as well as the realization that open persecution of “illegals” would remain official state policy going forward, hundreds of people took to the streets on July 29th under the banner of the movement’s mantra, “We Will Not Comply.” Almost 100 people were arrested for nonviolent civil disobedience during these protests, and a clear message of the refusal to cooperate with injustice was communicated to both local officials and an international audience alike.

While many of the events of that day have been well-reported, the opening salvo that set the tone of noncompliance and civil resistance seemed to slip by almost without notice. It was, however, a poignant and powerful action that reflected the best qualities of the nonviolence paradigm. Here is my recollection of what transpired that night as SB 1070 was to take effect:

The clock nudged toward midnight on a cool Arizona summer evening. With monsoon moisture in the air and faint stars flickering above, two columns of people solemnly proceeded on opposite sides of the street to the main entry point into their city. Families, children, and elders together filed into the street, with an air of celebratory defiance building as each individual added their body to the blockade. None would pass into this community for the foreseeable future, and people living in terror had openly lost their fear. The tone was now set, and the events of the coming day would reflect it, consciously or not.

This was the beginning of Arizona’s July 29th demonstrations against SB 1070 and related anti-immigrant policies. At 12:01AM that day, the parts of the bill that had not been struck down earlier in the week by a federal judge – including a mandate that all state officials and agencies enforce federal immigration laws to their fullest extent, and also a provision that criminalizes harboring or transporting undocumented persons – took effect. And in the tiny town of Guadalupe (pop. 6000) on the outskirts of Phoenix, community members fired the first nonviolent “shot” in the day’s struggle against legalized oppression.

As the tension mounted, city buses began to stack up and sheriff’s deputies slowly encroached toward the human blockade from both sides of the street. The line of resistance stood firm, however, and soon doubled when another line was formed mostly of local activists and allies in the struggle for justice and human rights. Law enforcement officers now bluntly stated their intention to make mass arrests unless the intersection was cleared. Still no one moved. The flummoxed deputy again made his pronouncement, and again the blockade remained. When the warning was repeated a third time, it became clear that neither the political will nor manpower was present to effectively deal with the dozens of civil disobedients who had physically created a wall of noncompliance at the edge of their town.

Following a phone call from the mayor, and with due regard to the facts that the symbolic action had accomplished its purpose and the people had stood up in solidarity, the blockade self-dispersed after more than an hour of holding the street. The point had been made: people were tired of living in fear, and they would not comply with laws like SB 1070 that seek to institutionalize that fear. Make no mistake, the provisions of the law were designed not so much to change the realities of living as an undocumented person in Arizona, but more so to inculcate a climate of permanent fear and to institutionally legitimize the worst of the state’s unjust police practices. But on this day, when the world would be watching, people stood up.

Episodes like this need to be placed in a context to fully understand their import. For the residents of tiny Guadalupe, a town made up of equal parts Mexican and Yacqui, there has been a constant reign of terror in their midst with the main perpetrators being Sheriff Joe Arpaio and his deputies. Guadalupe has no police force of its own, and so had made a contract with the county sheriff’s department to take on the role of policing the township. Over the years there have been numerous incidents and allegations of police misconduct, leading to a very public feud between Guadalupe’s former mayor and Arpaio that resulted in the contract being suspended and the sheriff’s department becoming unwelcome there.

What specifically prompted this dust-up were a set of 2008 immigration “raids” conducted by the sheriff’s office, which resulted in about 150 arrests with nearly half having immigration implications. The raids themselves essentially devolve upon massive sting operations where deputies scrutinize moving vehicles for the most minute traffic violations – for example, a cracked taillight or windshield, changing lanes without adequately signaling, or the improper use of a horn. These stops then result in ID checks, searches, and other escalations that can lead straight to deportations. The raids are conducted primarily in communities of color, leading many to suggest that the true nature of the “crime” being targeted is simply being brown-skinned.

Guadalupe’s political leadership at the time publicly averred that Arpaio and his forces had not been invited to the town to conduct these raids, with the former Vice Mayor bluntly stating that “Arpaio is doing it because he wants to show the Latin people that he has power.” A former councilwoman concurred, noting that “this is racial profiling and it needs to stop.” For her stance against Arpaio, former mayor Rebecca Jimenez was herself pulled over and ticketed by sheriff’s deputies for a broken headlight. “How do you like working for a sheriff who racially profiles against people of color?” Jimenez asked the deputy who pulled her over, according to a report released by the sheriff. “I didn’t think that Sheriff Joe was going to retaliate against me, but I guess that I was wrong,” she said, according to the report.

This is the backdrop against which Guadalupe’s residents took the streets in the opening hours of July 29th. The Phoenix New Times later reported that the crowd had “faced down” Arpaio’s deputies, with one resident saying that “regardless of what the law says, we’re all human beings. We shouldn’t be treated as something else.” Following the action, protest organizer Andrew Sanchez said that “it was peaceful, it was successful, and we managed to get the cops’ attention.” Indeed, this action of open noncompliance with unjust laws and practices was done in the best tradition of nonviolent civil disobedience, and it merits our attention as an important part of what will be an ongoing campaign of “noncooperation with evil” in the days ahead.

Randall Amster, J.D., Ph.D., teaches Peace Studies at Prescott College, and is the Executive Director of the Peace & Justice Studies Association. His most recent book is the co-edited volume Building Cultures of Peace: Transdisciplinary Voices of Hope and Action (Cambridge Scholars Publishing, 2009).

War and Planet Earth: Toward a Sustainable Peace

Changes in Gratitude: Eternal Thanks for a Nonviolent Future

Anarchism and Nonviolence: Time for a ‘Complementarity of Tactics’

Black power challenges a white Christmas in the Netherlands

Noncooperation with Evil in the Streets of Arizona