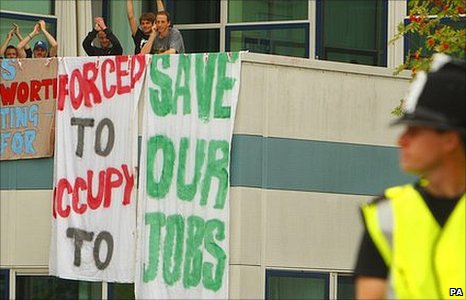 Former workers of the Vestas wind turbine manufacturing plant on the Isle of Wight gathered last month outside the building they occupied for 19 days last summer to mark the one year anniversary of their struggle. The Save Vestas Jobs! blog described the reunion as short-lived due to “the familiar faces of the old Vestas security team” arriving on the scene within a matter of minutes, “looking very concerned.”

Such fear on the part of a company that for all intents and purposes “won” the struggle would be unwarranted if not for two factors. First and foremost, many grievances among the workers remain standing. According to the campaign blog, “… the occupiers have still not been reinstated and a tribunal that was to be held last week for some of the occupiers ended prematurely when ex-workers were threatened with full and crippling costs by Vestas and forced to withdraw their case.”

The second reason Vestas has legitimate reason to fear continued protest is that many people were energized by the events of last summer to the point of feeling involved in something magical. The very site of the reunion, for example, was known as the “Magic Roundabout” because it was where campaign supporters gathered during the occupation and then for several months thereafter. It was a place made by the coming together of people for a united cause and gave empowerment to folks who likely didn’t have much before.

A reporter for the BBC recently recalled his experience at the “Magic Roundabout” last summer:

It developed into a small village community of those supporting the protestors inside. It had accommodation, a kitchen and the traditional brazier used in every industrial dispute since the seventies.

There was also a constant whirlwind of rumours. “I’ve heard there are riot police round the back and they’re going to storm the room,” I would be told with a confidential whisper. “They’ve cut off their food – they’re starving them out,” would say another.

However, sometimes the unlikeliest tale was the truth, like dismissal letters sacking the employees taking part in the sit-in being delivered with an apple, a can of fizzy drink and a slice of pizza each.

Sometimes it was the genuine good spirits of the protestors and their supporters – the belief that they were doing something truly good – that contributed to the good natured feeling at the factory gates.

Other times, there was a genuine sense of farce, especially with the unique communication system whereby notes and USB sticks were thrown (with a great deal of accuracy) to and from the building attached to tennis balls.

RMT General Secretary Bob Crow made an impassioned speech to supporters one evening and his grand finale was supposed to include a plane towing a banner with inspiration for ‘our boys on the balcony’.

An hour-and-a-half after the speech had finished, long after most of his supporters and media had drifted away, a plane did make a fly-past over the factory to the ironic cheers of the dozen-or-so supporters who remained.

“Maybe they got the wrong Newport,” joked one worker.

When Vestas failed to evict protestors from their own building at the first time of asking few could believe their luck. However, after the celebrations the reality of another six days sleeping on the floor of an office, away from friends and family, quickly hit home.

As a news story it gathered interest like a rolling stone. It is not often that Danish film crews visit the Isle of Wight, but as the situation escalated the occupation became global news.

Every aspect of the protest seemed to be dragged out – including the final week.

Although a court order to evict the workers was granted on the Tuesday, the final one did not leave the site until bailiffs arrived on the Friday.

It was a genuine sense of community that created the magic of last summer and the pieces to recreate it are just lying around, waiting to be reassembled.