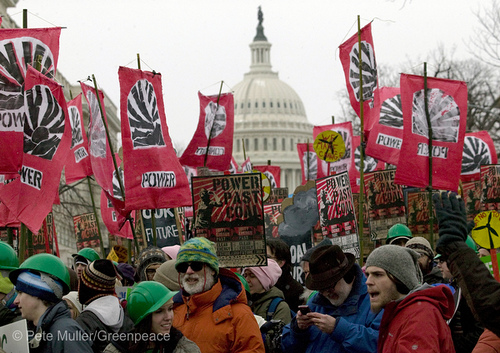 Leading climate activists and organizations are calling on Americans to demonstrate in big ways in the coming months. Bill McKibben of 350.org, along with the heads of Rainforest Action Network and Greenpeace USA, recently published an open letter stating:

We’re going to have to build a movement, a movement much bigger than anything we’ve built before, a movement that can push back against the financial power of Big Oil and Big Coal. That movement is our only real hope, and we need your help to plot its future.

Time is not on our side, so we’ve concluded that going forward mass direct action must play a bigger role in this movement, as it eventually did in the suffrage movement, the civil-rights movement, and the fight against corporate globalization… History suggests, in other words, that one way to effectively communicate both to the general public and to our leaders the urgency of the crisis is to put our bodies on the line.

The groups are soliciting ideas for direct action that are “infused with the spirit of Gandhi, Martin Luther King Jr., and other peaceful protesters.” These ideas must also aim for effective symbolic targets and be able to draw hundreds or thousands of people, while also being inclusive, community rooted, visually appealing, transparant and cost-effective.

These are no doubt lofty ambitions that invariably raise the troubling question: Can Americans really be convinced to take serious action? A recent piece in Adbusters addressed this dilemma head-on with some encouraging insight.

In his 2008 book, The Freedom Paradox, Clive Hamilton argues that within free-market capitalism, corporate interests actively discourage us from acting in accord with the values, preferences and desires we would endorse after careful consideration. Very few of us, he writes, would, upon deep reflection, say that it is our innermost desire in life to work incredibly hard at a job we dislike in order to possess the latest consumer products. Yet this is precisely the life our society encourages. From early childhood onward, advertisers expertly instill within us a set of values, preferences and desires that are not our own, but those that corporations wish us to have. As a result, our true ideals become increasingly neglected and stigmatized. This denial of our moral selves, Hamilton believes, can largely explain the discontent increasingly prevalent in affluent societies.

Empirical support for these ideas can be found in the work of Martin Seligman, the world-renowned psychologist and expert in the study of happiness. After years of research, Seligman has proposed that a major component of happiness is having meaning in our lives, which is achieved by being devoted to something larger than ourselves. This complements Hamilton’s arguments well. The things we devote ourselves to and derive meaning from will doubtlessly be linked with our inner values. And if devoting ourselves to things we deeply value is an important part of happiness, it seems only obvious that failing to do so – and living in societies that actively discourage us from doing so – would lead to unhappiness.

In essence, the research suggests if you feel that you should be taking certain actions or that you are not living up to your true ideals, you will probably be a happier person if you take those actions and live up to those ideals. It’s simple, really. But also quite important.

We, the humans alive today, are very likely the last generation that will be able to mitigate climate change and stave off global ecosystem collapse. Our responsibility is enormous. Yet while our politicians procrastinate and our polluting industries and lifestyles continue to expand heedless of the risks, many of us remain dormant. A small section of our society is alive to the issue and politically active, but climate change activists are still far too few to bring about the changes we desperately need.

Our greatest hope, then, may be that Hamilton and Seligman are right, that our societies harbor an enormous number of people who are failing to live up to their inner ideals and are unhappy as a result.

Paul Connor, the author of this Adbusters piece, cites the young activist Tim DeChristopher (who disrupted a federal gas and oil lease auction in 2008) as an example of someone who connected these dots for himself.

In an interview with Democracy Now, DeChristopher quotes the late US environmentalist Edward Abbey, who said that “sentiment without action is the ruin of the soul.” For much of his time as an activist on climate change, he explains, he felt a nagging disconnect between the scale of the issue and his response to it. But when he began to bid at the auction and risk imprisonment, he became profoundly calm.

Indeed, amidst a looming trial date that could land him in prison for up to ten years, DeChristopher also recently sounded the trumpet for mass demonstrations.

The more I advocate for stronger and bolder action from climate activists, the more I see the need for real human connections.  No amount of social media can match the empowerment of being in the streets with thousands of other people who share our passion.  That’s why mass mobilizations that engage in bold action are so important for our movement.

In particular, DeChristpher is calling on people to join the Appalachia Rising mobilization in Washington DC at the end of this month.

Appalachia Rising is a mass convergence on the capitol to fight mountain top removal mining from September 24-27th.  The first couple of days will be the Voices From the Mountains, where we will hear from those most impacted by mountain top removal, and strategize with movement leaders.  The final Day of Action will be a march on the White House, and civil disobedience by those who choose to participate.  The whole event will send the message to Washington that there will be major civil unrest, as long as corporations are allowed to blow up mountains, poison people’s water, and threaten our future.

So perhaps what activists need to do is not only compel people with the urgency of climate science and environmental destruction, but also the urgency of human biology to be active toward a purpose larger than ourselves. Hopefully this fal we’ll begin to see such progress.

Climate science demands action and so does human biology