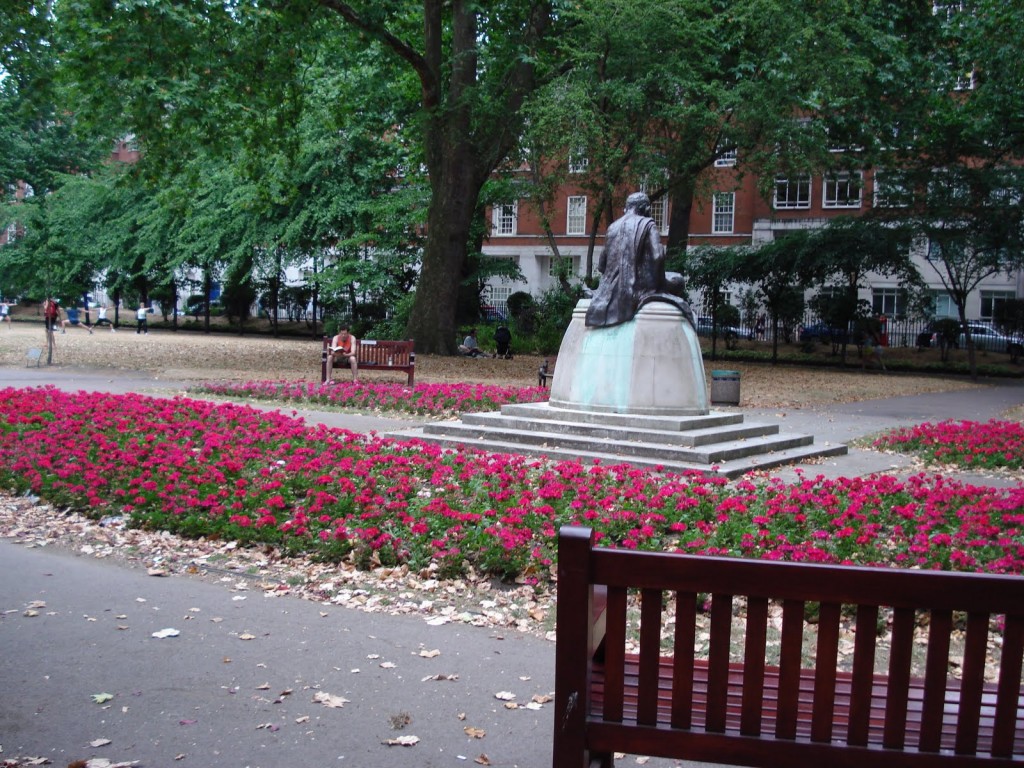 There are dozens of lovely, tree-filled squares in London, but only one—Tavistock Square, in northern Bloomsbury—is dedicated as a peace park. Surrounding a statue of Mohandas K. Gandhi, India’s Mahatma (“Great Soul”), are benches with plaques asserting the commitment of one Londoner after another to Gandhi’s vision of peace and the “soul force” of nonviolence.

One of the plaques, however, carries the name of someone who would have loved to be an honorary Englishwoman, but was in fact a New Yorker, born and bred. It says, “From Beatrice Kelvin of New York City, who works for world peace and loves London.”

Bea Kelvin was my mother, and thanks to her determination and that of her daughters, the plaque was placed there in her lifetime, as she wanted it, on a bench facing the back of Gandhi’s statue (why the back of his statue is a different story, equally typical of my mom). Today being Gandhi’s birthday and the International Day of Nonviolence, I put this out in my mother’s memory and his.

The Hotel Tavistock, across the street from Tavistock Square, is a little the worse for wear since its construction in the Art Deco-mad Thirties. But it’s still a handsome example of that then-modern school of architecture, and the slight wear-and-tear has brought the price down to my family’s preferred range. So it was that my peripatetic mother discovered the Tavistock in her world-traveling heyday, learned that the square across the street was a peace park, and began to conceive a desire to have her own plaque there, talking about it from time to time as another might talk about where she wanted to be buried. So it was, too, that she and her two daughters continued to stay there even after Bea could no longer travel alone and I had to accompany her when she left the country. And so it was that in 2005 my sister Joan and I found ourselves at the Tavistock without Bea, who had had a stroke the year before and couldn’t go anywhere at all anymore.

We had stepped across the street to look at the square for her, so to speak, and were talking wistfully about her desire to have her name represented there. Then it occurred to us that there probably was a sign somewhere in the park that could tell us how one went about acquiring a plaque on a bench, and faster than you could say “Mohandas K. Gandhi,” Joan was speaking to the very parks department representative on her international mobile phone …

Back in the States, I told Bea about our research, thinking it was another installment in our increasingly frequent conversation about her post-mortem arrangements. “So you see,” I said, “we can get you a bench there after you, um—after—well, you know—”

She got it. She never did see the real thing, but she saw pictures. She was very proud of it. For the last years of her life, she kept a photo of the bench—taken by one of her sons—in a prominent spot on her piano, along with her pictures of her grandchildren. (She was convinced that the park had put her plaque on the wrong bench and that she had requested it facing the front of Gandhi’s statue, but in fact she had misread the diagram they sent and insisted that the spot she chose—the one where the plaque is—was eye-to-eye with him.) When she died, four years after the plaque was installed, we displayed a large photo of it at her memorial service and noted in her death notice in The New York Times that a “bench in London’s Tavistock Square is dedicated to peace in her name.”

On this International Day of Nonviolence, “The Political Landscape” salutes Mohandas Gandhi and everyone else—including my mother—who has ever dreamed of a world without slaughter or cruelty and put their lives to the service of bringing that world to birth. May we finally make it so.

This blog orginally appeared on The Political Landscape.

Judith Mahoney Pasternak is a Paris-based writer and journalist. She edited the Nonviolent Activist, the magazine of the War Resisters League, for 10 years and served on the WRL board for another five, until 2010.

Flying in the face of decency: sanctioning Palestine for seeking statehood

For my Mother, on Gandhi’s Birthday