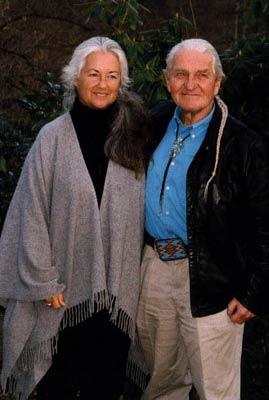 On the sixteenth story of a building in Chelsea last Friday night, the noise of Manhattan was momentarily drowned out by a small circle of people discussing the path to world peace, beginning with themselves. When asked why they were there, respondents listed reasons such as, “I have forgotten that being is more important than doing,” or, “revisiting teachings that I learned long ago,” or, with a hint of big-city loneliness, “I need groups.” And they’re not alone. This kind of gathering, gazing inward in the search for an end to global injustice, repeats itself the world over—from a yoga retreat in Costa Rica, to a Rainbow Gathering, to the basement of your local community center. But, I’ve been wondering, what are these people really doing?

The facilitators of the workshop, RainbowHawk and WindEagle, longtime teachers of the pre-Mayan oral tradition they have come to call “First Peace consciousness,” explained how people with fully-realized souls can cultivate peace with others, which eventually leads to peace between nations. The main tenets of First Peace philosophy are eight universal principles, which are paired with eight practices for people to implement. RainbowHawk and WindEagle started their organization, Ehama, with the aim of making this wisdom more accessible. Ehama strives to “be able to actually have very grounded, practical tools that enable us to live in a way of harmony with the universe,” WindEagle explained to me in an interview following the workshop. By giving people the tools to form their own peace circles, the Ehama philosophy of self-change for changing the world is supposed to have a ripple effect. But besides the peaceful air filling the room, it wasn’t entirely clear to me how this group was really forging a viable path toward peace, in any tangible sense. The message of spiritual renovation seemed unhinged from the messy, pressing global issues that it purports to solve: war, violence, oppression, exploitation.

The teaching on Friday night was only an introduction; a full-day workshop on Saturday was meant to provide deeper insight into the philosophy. The historical, sociocultural background to these eight principles and practices, however, was not provided; there was virtually no context to explain where, when, why, or how they were developed, and what their effects have been in the past. Perhaps, for some, the belief that these tenets are universal would trump the specificities, but as a participant-observer on Friday, I felt that they were hanging in the air without anything to ground them in time or space.

For a movement that claims universal principles, the fan-base seemed to hail from an alarmingly narrow sector of society: white, educated, middle-class, over thirty-five. Later, I asked WindEagle about Ehama’s efforts to work with youth and minorities. As far as youth, she explained to me, Ehama has been collaborating with a team of people in Denmark to create a curriculum for ages 12 to 19.

As to targeting minorities, or any specific population whatsoever, Ehama does not see this as an explicit goal, although they do want to reach people of diverse cultural traditions. For example, Ehama holds First Peace teachings with corporations, but not because they believe that corporations are causing harm in the world. Instead, WindEagle and RainbowHawk see people as merely people, rather than representative of entities. Ehama is, however, very interested right now in connecting with peace practitioners in different cultural or religious traditions, and adding their tactics to the Ehama repertoire. Ehama has brought their First Peace teachings to Germany, Japan, and soon China; they are also in the process of discussing a potential partnership with the United Nations to do a peace teaching in Africa.

Gandhi famously said, “You must be the change you wish to see in the world,” and this seems to be central to Ehama’s approach. Their plan for spreading peace puts self-work at the heart of a movement that they believe is gradually but steadily spreading all over the world. But how effective can their teachings be without a more pragmatic basis? For example, the precept of honoring the temple of our bodies—one of Ehama’s eight principles—raises questions of how we can do this in a world of fast-food, agribusiness, unwholesome school lunches, and powerful pharmaceutical companies. One may need to change the whole world in order to change oneself. The teachings appear somewhat abstract in a world where policy-making, political campaigns, wars, structural racism, and bigotry have very concrete effects.

It doesn’t appear that addressing such issues is really the goal of First Peace consciousness-building. I don’t mean to pass judgment over people who want to find peace within themselves, and in fact I think that many activist movements could stand to do more in the way of spirituality and self-improvement. But I get queasy about the claim that there is a direct link from peace within oneself to peace amongst nations. It reflects too clearly a generation of onetime activists, starting with counterculture movements in the 1960s, who have retreated from politics and instead embraced private, utopian visions without any serious public agenda.

Ehama’s real value may be in allowing people who are already interested in making a better world to find the inner resources to carry out their work. When asked how Ehama compares to other nonviolent forms of social action, such as labor unions, political campaigns, or non-profit advocacy groups, WindEagle answered, “We’re really working on a grassroots level. We’re not waiting for, or envisioning that the government or large organizations are going to make the change that we as individuals need to make.” This sense of openness and fluidity in First Peace philosophy gives it both real potential and a sense of complacency. Perhaps the most profound gauge of Ehama’s worth comes through in what that one participant at Friday’s workshop said: “I need groups.” The way to real peace may start with something as simple as that.

Rachel Signer is a sociocultural anthropologist and journalist, living in Brooklyn, NY.

A false sense of objectivity: Sharif Abdel Kouddous on reporting from Tahrir Square

On the civil rights trail with Bob Fitch

The police as a proxy for power

Reclaiming the nonviolent side of history

How one Latin American peace group has persevered over 40 years

Presence is the antidote to killing

Chicago’s South Side rises up against gun violence

Can inner peace bring peace to the world?