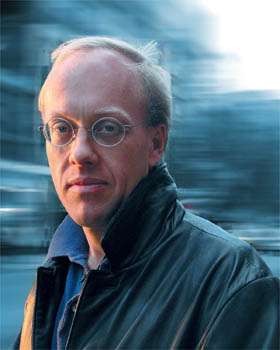 In his most recent column for Truthdig, former New York Times foreign correspondent Chris Hedges declared his intent to take nonviolent action against the wars in Iraq and Afghanistan by joining Daniel Ellsberg, Medea Benjamin, Ray McGovern and several military veteran activists in a protest outside the White House on December 16.

Many of us will, after our rally in Lafayette Park, attempt to chain ourselves to the fence outside the White House. It is a pretty good bet we will all spend a night in jail. Hope, from now on, will look like this.

As a frequent reader of Hedges’ columns I found this particularly noteworthy because despite his pointed and passionate critiques of American foreign policy, I only ever saw an occasional reference to nonviolence. If anything, his veracious words were so devastatingly hopeless at times that I would even find myself questioning what could be done to change this violent culture of ours. So I was extremely heartened when, in this most recent column, he explicitly connected hope with nonviolence:

Hope, which is always nonviolent, exposes in its powerlessness the lies, fraud and coercion employed by the state. Hope does not believe in force. Hope knows that an injustice visited on our neighbor is an injustice visited on us all. Hope posits that people are drawn to the good by the good. This is the secret of hope’s power and it is why it can never finally be defeated.

His final thoughts about the upcoming action make for a great reminder of why so many committed nonviolent activists do what they do. It speaks to those who desire to be effective and those who simply want to do what’s right because it’s the right thing to do:

I cannot promise you fine weather or an easy time. I cannot assure you that thousands will converge on Lafayette Park in solidarity. I cannot pretend that being handcuffed is pleasant. I cannot say that anyone in Congress or the White House, anyone in the boardrooms of the corporations that cannibalize our nation, will be moved by pity to act for the common good. I cannot tell you these wars will end or the hungry will be fed. I cannot say that justice will roll down like a mighty wave and restore our nation to sanity. But I can say this: If we resist and carry out acts, no matter how small, of open defiance, hope will not be extinguished. If all we accomplish is to assure a grieving mother in Baghdad or Afghanistan, a young man or woman crippled physically and emotionally by the hammer blows of war, that he or she is not alone, our resistance will be successful. Hope cannot be sustained if it cannot be seen.

Any act of rebellion, any physical defiance of those who make war, of those who perpetuate corporate greed and are responsible for state crimes, anything that seeks to draw the good to the good, nourishes our souls and holds out the possibility that we can touch and transform the souls of others. Hope affirms that which we must affirm. And every act that imparts hope is a victory in itself.

Hopefully more information about this planned action will transpire so interested parties can show their solidarity.

Singaporeans take to stage to end violence against women

Learning important lessons from Occupy, Momentum has helped incubate new movements that have reshaped the political landscape over the last decade.

Afghanistan and beyond: End US war-making everywhere